The policy challenges facing the country are immense. Economic growth hasn’t reached its full potential, individuals and businesses pay too much for health care, and red tape holds back innovation and entrepreneurship, among many other concerns. But presidential candidate Senator Elizabeth Warren (D-MA) has a plan for all of them: Raise taxes.

In total, Senator Warren is proposing raising federal taxes by $26.3 trillion over a decade to finance enormous expansions of federal benefits, such as Medicare for All, student loan forgiveness, and universal child care.[1]

She also projects she could raise an additional $2.3 trillion in new revenue from greater tax enforcement from the Internal Revenue Service, bringing the total new federal revenue projections to $28.6 trillion over a decade.

Senator Warren’s policy proposals include a wide variety of tax increases. These tax hikes hit families, businesses, and estates. Contrary to her claims, many of these plans would, in fact, raise taxes on the middle-class.

Senator Warren’s Medicare for All plan included a number of additional tax increases, which are discussed below.

All told, these tax increases would raise $26.3 trillion in new revenue for the federal government over a decade. This puts Warren’s tax plan decidedly to the left of fellow presidential candidate and Senator Bernie Sanders (I-VT), whose proposals would hike taxes by “only” $23 trillion.[17] 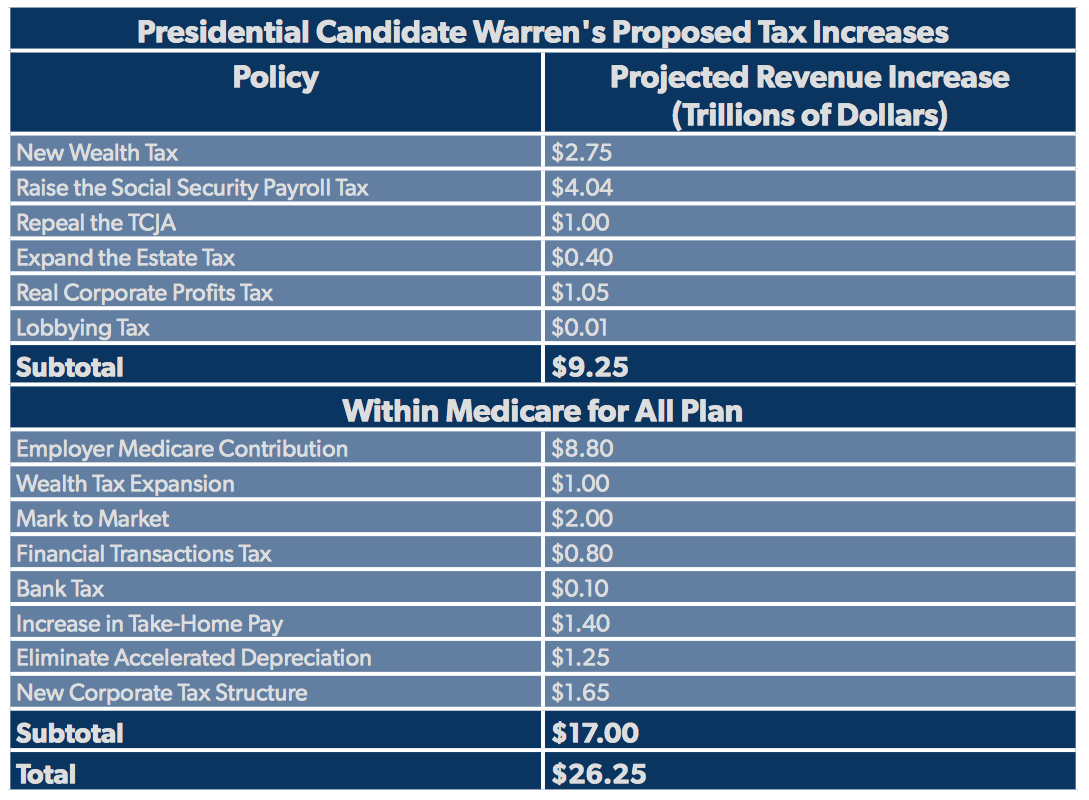 For comparison, the Congressional Budget Office estimates the federal government is set to collect $23.2 trillion in revenue from the individual income tax from 2020 to 2029, and individual and corporate income tax collections combined are estimated to reach $26.8 trillion. In other words, the total revenue effects of Warren’s proposals would be similar to a plan in which every individual and corporate tax bill was doubled outright. The federal government’s total projected revenue is $45.6 trillion over the same time period. If enacted, these tax increases would expand total federal revenues by 63 percent over a decade—a tax hike so massive that it’s difficult to overstate the negative impacts it would have on the American economy.

Senator Warren also claims that she can increase tax enforcement by the Internal Revenue Service to raise an additional $2.3 trillion in revenue over the next decade, raising the total in new federal revenue to $28.6.

Finally, Senator Warren has made other vague tax increase proposals, such as supporting the elimination of “federal oil and gas subsidies, and closing corporate tax loopholes that promote moving good jobs overseas.”[18]These have not been included as they are too vague to determine the exact policy proposed.

There are reasons to believe that Senator Warren’s tax increases will result in less revenue than she claims. In essence, her proposed tax hikes suffer from overzealous assumptions and sloppy math which doesn’t account for interactions among her own ideas.

Several of the revenue estimates produced for the campaign have been subject to scrutiny questioning her assumptions. For example, her initial wealth tax proposal was estimated to raise $2.75 trillion over a decade by economists Emmanuel Saez and Gabriel Zucman. However, the estimate is likely far too high. Larry Summers and Natasha Sarin estimate it could be as little as 40 percent of Saez and Zucman’s estimate.[19][20]In another instance, an outside estimate of Warren’s Real Corporate Profits Tax said it would raise $872 billion, compared to the $1 trillion projected by her campaign.[21]

Additionally, Warren’s proposals, particularly within her Medicare for All plan, do not account for interactions among the different policies themselves. Strictly adding the conventional scores of each tax increase will overestimate the amount of revenue generated. For example, a new wealth tax would interact with mark-to-market taxation. Over time, the mark-to-market tax would reduce the amount of wealth held by the ultrarich, reducing the amount of revenue collected from the wealth tax. Failing to account for such interactions will create massive budget risks.

In some ways, this is good news for taxpayers. The new tax revenue collected under Senator Warren’s proposals would be less than advertised. While her proposed tax hikes are still unthinkably large, it wouldn’t quite be a full 63 percent increase in the federal revenue baseline. But it means that her spending plans are not even close to fully-funded, putting huge upward pressure on already-high federal deficits.

While the practical results of Warren’s total tax hikes is unknown at this time (one shudders at the thought of a dynamic score that would model their economic impact), $26.3 trillion is the sum of tax increases her campaign has released to the public and thus is worthy of scrutiny on its own terms.

Senator Warren’s solution to virtually every problem is raising taxes on Americans and businesses. Her campaign advertises more than $26 trillion in new taxes over the decade, growing federal revenue collections by 63 percent.

[1]These totals only include policy proposals released by Senator Warren’s presidential campaign, and do not include tax proposals from her Senate career.

[20]Lawrence H. Summers and Natasha Sarin, “Be Very Skeptical about How Much Revenue Elizabeth Warren’s Wealth Tax Could Generate,” The Washington Post, June 28, 2019.