A coalition of good-government organizations and advocates sent an open letter to the House and Senate lead appropriators urging them to increase the budget for the legislative branch by 10 percent, a $530.9 million funding increase.[1] This is just the latest in a series of transpartisan efforts aimed at strengthening the institutional capacity of Congress and its primacy in the budgeting process, some of which has been

The letter notes that funding levels for Congress have lagged behind increases in discretionary spending in other parts of the federal government and says that increased funding would provide additional resources to “lead in federal policymaking, provide services for constituents, and conduct oversight that roots out waste, fraud, abuse, and malfeasance.”

Lawmakers may find it necessary to increase resource available to Congress to modernize operations, increase policymaking and support staff, improve constituent service, and strengthen the institution’s analytical and oversight capabilities – including cost estimates of legislative proposals from the Congressional Budget Office (CBO) – but broader budget implications must also be taken into consideration.

With the record levels of federal debt accumulated after years of overspending, calls to increase allocations for the legislative branch can easily be offset with spending reductions elsewhere in the budget to minimize impact on taxpayers. 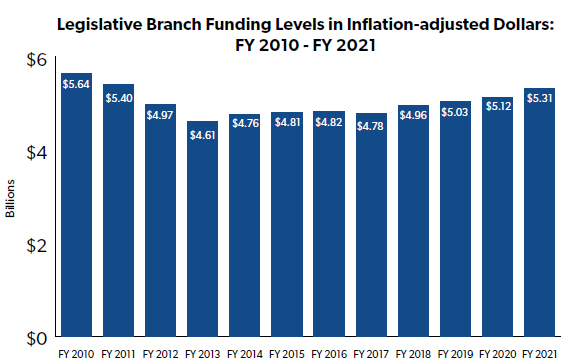 Legislative funding has been relatively flat over the past eleven years, with reductions each year through 2013 followed by annual increases. The FY 2010 spending level of $4.67 billion is equal to $5.64 billion in today’s dollars.

Based on CBO data for FY 2020 outlays, the major components of the legislative branch funding include:

It is worth noting that salaries for elected members of the House and Senate have been frozen since 2009. They would otherwise be much higher today, consuming a greater part of the legislative branch budget. Members of Congress are eligible for an automatic annual cost-of-living-adjustment unless they vote not to accept it, which they have done since 2009. Rank-and-file members’ salary stands at $174,000 annually. The Speaker of the House receives $223,500 per year while leaders of the House and Senate and the Senate President pro tempore collect $193,400 annually.

Salaries for members of Congress are recorded in CBO’s budget baseline as discretionary spending, but the pay freeze is recorded as mandatory spending. This means that CBO assumes the pay freeze will be maintained throughout the ten-year budget window reducing outlays by $24 million over the period.

An additional smaller cost crops up occasionally due to the outmoded practice of providing lump sum payments equal to the annual congressional salary to heirs upon the passing of members of Congress. This is in addition to the eligibility for survivor benefits under the Federal Employees Retirement System.

There are also other smaller components of the legislative branch budget that might not be widely known to the public:

Any increase in legislative branch costs will get built into the annual budget projections produced by CBO. As a result, an initial one-year boost of $530.9 million would add over $5 billion to the budgetary baseline over the decade. Unless there are corresponding offsets to the increases, there would also be increased payments from the federal debt.

There will likely be pressure for additional increases in legislative branch funding after the security breach of the Capitol building on January 6. On that day, the USCP was seemingly unprepared and overwhelmed by the large crowd, instigating a significant presence of National Guard troops defending the complex that will extend through at least mid-March. According to reports, the USCP has also recommended construction of a permanent barrier to boost security to the Capitol building. This would also boost annual maintenance and manpower costs.

Lawmakers could start by looking within the legislative branch budget for offsets to the new spending. For example, based on CBO’s projection of funding, eliminating taxpayer funding of the Botanic Garden would save an average $19 million per year, amounting to $185 million over the decade. While the Botanic Garden may provide valuable services, it is reasonable to assume it could survive through private support as many other facilities in the District do.

Additional offsets can be found in the unique joint Toward Common Ground publication from National Taxpayers Union Foundation and the U.S. Public Interest Research Group Education Fund listing nearly $800 billion in savings across the federal budget.[7] This project is unique as an effort to bridge the political divide. Our organizations may have very different ideological perspectives, but we worked together on this report to “mutually identify areas of wasteful, cronyistic, and excessive spending that plague our federal budget”.

CBO also released its biennial Budget Options report last December which included updated savings estimates for several of the items that were included in the Common Ground report.[8]

Members should resist using gimmicky offsets to spending increases. Spending bills often include “offsets” that eliminate expired budget authorizations. However, in many cases, these funds would never actually be spent so using these as offsets amounts to a mere accounting trick.

The signatories of the letter make a case that Congress needs more funding to “rebuild Congress’s lost institutional capacity.” Increased resources could also improve the budgetary analysis and cost estimates provided by CBO, whose role is only more important in a world governed by the complex rules of budget reconciliation.

At the same time, lawmakers also have an opportunity to prioritize the use of taxpayer funds by trimming overspending. Congress can kill two birds with one stone by strengthening its capacity and reducing wasteful spending elsewhere in the budget.

[3] For additional information, a 2020 report from the Congressional Research Service (CRS) further breaks out components of the House’s top line spending listed above by CBO, including $615 million for Members’ Representational Allowance, which provides for office expenses, personnel, travel, and mail. Congressional Research Service. (2020). Legislative Branch: FY2021 Appropriations. Retrieved from https://fas.org/sgp/crs/misc/R46469.pdf.