As the national debt continues to climb, progressives have attempted to deflect blame by claiming that taxpayers do not pay enough in taxes. However, there’s only one culprit for our exploding national debt: the government spends far too much. Congress has now racked up deficits every year since 2000. The gross federal debt now tops $30 trillion thanks to excessive spending.

Fortunately, there’s a solution, even if that solution only becomes more difficult the longer Congress delays in implementing it. Last week, Senator Rand Paul (R-KY) introduced his Six Penny Plan to get our fiscal house in order. The plan would begin to tackle annual deficits by cutting six cents out of every dollar spent. Over five years of gradual reductions, the budget would be balanced while also allowing for the individual income tax reductions in the Tax Cuts and Jobs Act (TCJA) to be extended. The Plan also includes important reforms to tighten enforcement of budget discipline and improve scorekeeping.

Senator Paul first introduced a Penny Plan in 2017. At the time, it would have only required savings of 1 cent per dollar spent. But as the budget has grown worse, larger cuts are now required to fix the growing budgetary imbalance. If Congress had adopted his original plan, the budget would be in much better shape today. Instead, with annual trillion-dollar deficits, the federal government is on a fiscally perilous path.

In a study earlier this year, National Taxpayers Union Foundation noted that, after adjusting for inflation, it took from the founding of the Republic until 1970 for total federal spending to top the $30 trillion mark. In total through 2021, the government has spent over $190 trillion in adjusted dollars and half of that ($95 trillion) has been rung up since 2000.

In the modern era, spending has exploded as a share of GDP from 18 percent at the turn of the century to 41 percent last year. Spending has also grown significantly per capita over that period, rising from $10,300 to $25,100.

The Congressional Budget Office’s (CBO) updated baseline shows how much worse the problem will become. Without a change in course, the government is on track to add $16 trillion to the debt by 2032. At the same time, the size of the government’s publicly-held debt burden will overtake the size of the US economy in a few short years, rising to 110 percent of GDP by the end of the next decade.

Some in Washington act as though massive deficits are the new normal, but this normal is not sustainable. Annual deficits this large will fuel rising interest rates, which in turn will make the cost of financing the government’s debt much more expensive. What’s more, inability to practice fiscal restraint in normal years will constrain the federal government’s ability to respond to economic crises.

Interest costs on the debt will total $400 billion this year. Over the next decade, this obligation is projected by CBO to triple to $1.2 trillion, eating up a larger and larger share of total spending. If this is allowed to happen, the cost of managing the enormous debt that Congress has run up will be unfairly dumped onto future generations of taxpayers.

To prevent the perpetual accumulation of debt, Senator Paul's Six Penny Plan approach would take smart, incremental steps towards fiscal responsibility by cutting 6 cents for every dollar of spending. 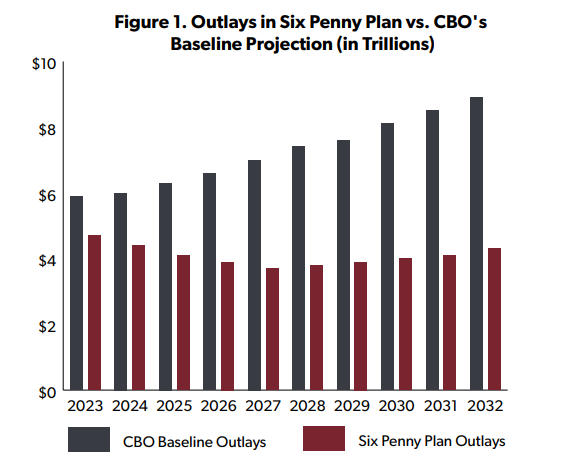 Under CBO’s baseline, a projection of how spending would take place over the next decade based on current law, outlays will grow every year, reaching nearly $9 trillion in 2032. The Six Penny Plan would set an alternative track, reducing spending by nearly $300 billion in the first year, then by six percent a year through 2027.

These cuts would lead to a much more favorable budgetary outcome. Instead of annual deficits adding nearly $16 trillion to the debt through 2032, the budget would record surpluses starting in 2027, with a net surplus of $73 billion over the decade. 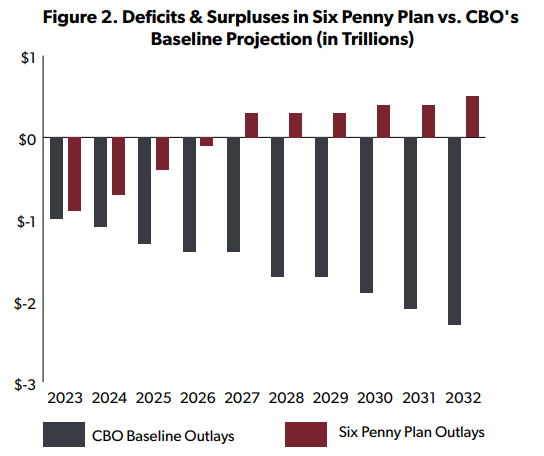 Senator Paul’s budget blueprint achieves balance by cutting spending and slowing its growth in later years, but it also would reduce taxes compared to CBO’s baseline. In CBO’s forecast, the government would collect $56 trillion through 2032. Part of the reason why tax revenues are projected to grow so significantly after 2025 is that under current law, key parts of the TCJA are set to expire. These expiring provisions include individual income tax rate reductions, as well as increases to the standard deduction, child tax credit, and alternative minimum tax exemption threshold. 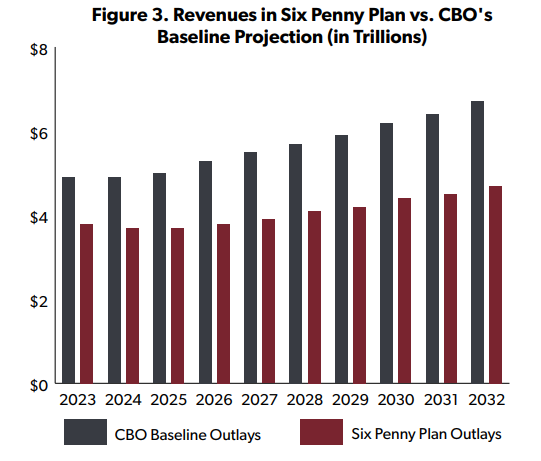 An important part of Paul's plan is that it will achieve a balanced budget while also allowing for the extension of these provisions, thereby preventing tax hikes. If the tax cuts are allowed to expire, millions of workers will see less take-home pay, causing the economy to suffer.

As NTUF noted last year, the tax cuts not only helped to fuel economic growth, but also increased wages for lower-income earners. The tax code actually became more progressive as upper income earners bore a larger share of all income taxes paid. CBO’s baseline notes that the expiration of the TCJA would have a dampening effect on economic growth. The Six Penny Plan will leave in place pro-growth tax policies and make sure Americans get to keep more of their hard-earned money.

The Six Penny Plan also includes important reforms to the budget process and scorekeeping. It would tighten enforcement of budget discipline by making it harder for Senators to overturn points of order. These challenges against provisions that violate various budgetary rules or resolution spending levels are typically waived, some requiring either a simple majority or three-fifths of Senators. The Six Penny Plan would raise the threshold for all points of order to two-thirds, requiring that at least 66 Senators consent to waiver.

Senator Paul’s blueprint would help contain the creation of duplicate programs, which is a significant problem across the vast federal bureaucracy. There are far too many examples of programs set up with the same purposes across a varying array of departments and agencies. For example, the Government Accountability Office recently reported that there are over 100 fragmented and overlapping broadband programs across 15 different agencies.

Similarly, under the late former Chair Mike Enzi (R-WY), the Senate Budget Committee reported in 2020 on duplicative federal housing programs throughout multiple departments and agencies providing $50 billion per year for housing assistance and putting taxpayers on the hook for guaranteeing $2 trillion in home loans.

The Six Penny Plan would have CBO determine whether legislative proposals run the risk of creating duplicative or overlapping programs. CBO would add this information in the cost estimates it regularly produces for legislation approved out of committees. A similar proposal is included in H.R. 638, the Cost Estimates Improvement Act introduced by Representative Michael Cloud (R-TX).

If Congress had adopted Sen. Paul's original plan in 2017, the federal budget would be balanced today. Unfortunately they did not, and what had been a one penny plan is now a six penny plan. The more Congress delays addressing the debt, the greater the problem will become and the more drastic and difficult potential solutions will have to be.

James Madison once said that a public debt is a public curse. CBO’s budget outlook warns that massive deficits crowds out private investment, reduces economic output and income over the long term, and constrains the ability of lawmakers to fiscally respond to the next unexpected emergency. Rand Paul’s Penny Plan would lead to balance, stop burdensome, job-killing tax hikes and strengthen the economy by freeing up resources for the private sector.

Taxpayers can only hope that Congress takes action so that Sen. Paul never has to draft a Dime Plan or a Quarter Plan.