The amount of money spent to subsidize the post-White House lives of former presidents may be surprising to taxpayers. In an era of high deficits and soaring debt, Americans are providing millions of dollars in perks and benefits to former presidents - who themselves are all multimillionaires. The generous pension and allowances available to retired presidents were set in place in 1958 because Harry Truman faced financial difficulty after leaving office. His situation was unique in the modern era: All the presidents serving after Truman have been millionaires. Thanks to pricey speaking fees and lucrative media production and book deals, modern day presidents have ample means of generating income after they leave office. Yet they are still eligible for taxpayer-funded benefits. The benefit system needs to be reformed to take into account 21st century realities and let taxpayers off the hook for expensive perks to millionaires.

The biggest personal benefit that former presidents are entitled to is an annual pension equal to the pay for a Cabinet Secretary, which is $210,700 in 2018. They are also eligible for additional benefits: 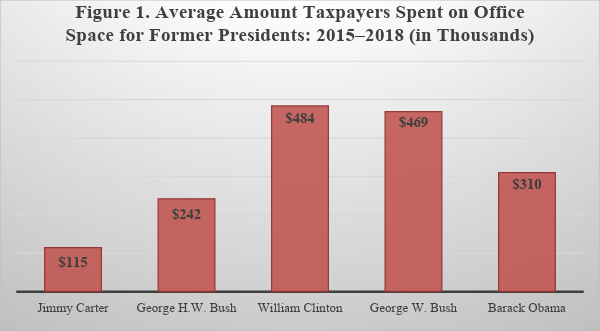 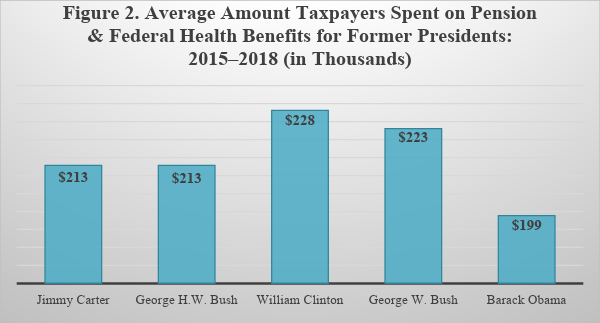 As the data shows, the costs are steadily increasing as each successive president leaves office. To address this problem, reform legislation has been introduced in the House by Rep. Jody Hice (R-GA) as H.R. 3739, and in the Senate by Sen. Joni Ernst (R-IA) as S. 1791.

The Presidential Allowance Modernization Act of 2017 would limit the pension a president could receive to $200,000 annually, with the amount being indexed to inflation. It would also limit the annual allowance for office space and other expenses to $500,000 for the each of the first five years, reduced to $350,000 for the next five years, and down to $250,000 per year afterwards. The act would reduce this allowance dollar for dollar by the amount that a president’s adjusted gross income exceeds $400,000. The bill would leave intact current healthcare benefits and Secret Service protection. The Congressional Budget Office (CBO) estimated that the legislation would save $7 million over its first five years, and $23 million over ten years.

Similar legislation was also introduced in the previous Congress (H.R. 1777 and S. 1411) but with office allowances capped at $200,000 and indexed annually for inflation. CBO estimated that version of the bill would have reduced outlays by $10 million over five years.

H.R. 1777 was passed by Congress but was vetoed by President Obama six months before he would have been become eligible for the perks. Because the White House had not issued any veto threat prior to the vote, the thumbs down came as a surprise. The given reason was that the former presidents complained that the reforms would have forced them to immediately terminate salaries and benefits to their staff because it left them “no time or mechanism … to transition to another payroll.”

The current version of the Presidential Allowance Modernization Act was passed in the House by voice vote and awaits action in the Senate. It is not expected that the bill would be vetoed this time around. The higher allowance caps should assuage the concerns of former presidents. Moreover, the reforms in the allowance modernization Act align with the principles laid out in President Trump's comprehensive reorganization proposal to improve the efficiency and accountability of federal programs. President Trump, with an estimated net worth of $3.1 billion, has also led by example when it comes to minimizing direct taxpayer support for the chief executive. To date, he has donated all of his presidential salary to various charities.

Presidents enter office with wealth and leave office with opportunities to earn even more income. In the modern era of Netflix production deals, and speech opportunities ranging from $175,000 to $500,000 per event, it is time to reform this federal program that subsidizes millionaires.

Demian Brady is Director of Research with the National Taxpayers Union Foundation.