Spending levels are an important metric in budget data reports from the Congressional Budget Office (CBO), but oft overlooked is the fact that total spending is actually larger than reported. For example, CBO reports that the federal government spent $6.8 trillion in 2021. More comprehensive budget data from the White House's Office of Management and Budget (OMB) shows gross outlays totaling $7.5 trillion, $710 billion (9 percent) higher than CBO's outlay figure. The variation between these two figures boils down to the way sources of receipts are recorded in the federal budget. The gross spending figure, before accounting for offsetting receipts, sheds more light on the true fiscal footprint of the federal government.

The funds that the government collects are recorded in the budget either as revenues or as offsetting collections. Revenues include receipts from taxes, customs duties, transfers from the Federal Reserve, fees for permits and regulatory and judicial services, fines, penalties, forfeitures, and other miscellaneous receipts. These funds are assessed and collected pursuant to the government's exercise of its sovereign power and cannot be legally avoided. For FY 2021, CBO reported total revenues of $4.05 trillion.

Offsetting receipts and collections are credited against spending in the federal budget, either against specific accounts or government-wide general outlays.The largest portion of these results from transfers among governmental accounts. For example, these include transfers from agencies' accounts to civil service and retirement trust funds for their employees. As funding is moved around between intragovernmental accounts, these transfers cancel each other out and result in no net effect on the deficit. They are recorded in the budget to show how funds are being allocated In FY 2021, the budget recorded intragovernmental transactions totalling $1.5 billion.

The $710 billion gap between gross spending and net spending results from offsetting receipts and collections from the public. Unlike the payment of taxes, these receipts and collections result from more business-like transactions such as payments for products or services. Examples include sale of postage stamps, entrance fees for national parks, royalties from Outer Continental Shelf oil extraction, and premiums charged for Medicare benefits. In theory, transactions recording offsetting receipts generally recoup the cost of providing access or a service to a particular beneficiary, rather than primarily raising revenue.

The determination of how the funds are recorded in the budget is the result of long-standing conventions as well as budget concepts developed since the Report of the President’s Commission on Budget Concepts in 1967. However, the distinctions are not always clear cut. OMB notes that $23.1 billion ought to be treated as revenues because they derive from the sovereign power of the government but:

“... they are classified as offsetting rather than governmental receipts either because this classification has been specified in law or because these collections have traditionally been classified as offsets to outlays. Most of the offsetting collections and offsetting receipts in this category derive from fees from Government regulatory services or Government licenses, and include, for example, charges for regulating the nuclear energy industry, bankruptcy filing fees, and immigration fees.”

While enrollment in Medicare is not technically mandatory, those who are receiving Social Security or Railroad Retirement Board benefits are automatically enrolled in Medicare, and coverage begins the first day of the month they turn 65. Opting out can prove tricky. Moreover, the sheer size of Medicare crowds out, or displaces, private insurance options. CBO's outlook accounts for offsetting collections in Medicare, showing gross spending of $868 billion offset by $179 billion in offsetting collections including premium payments ($122 billion, according to OMB) and recoveries of overpayments made to providers, and other amounts. 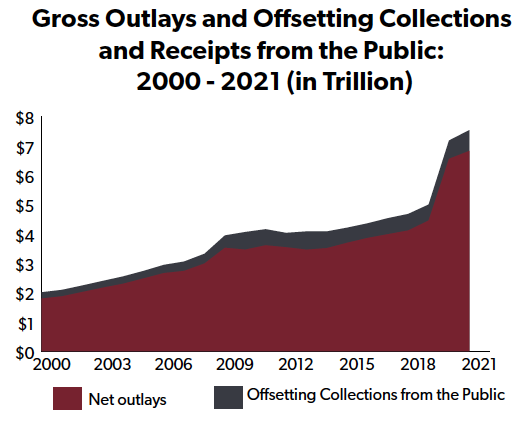 The chart above shows the gross level of spending each year since 2000 and the amount offset with collections from the public. The data is reported within OMB's Analytical Perspectives volume published with the release of the President's annual budget. Offsetting collections have masked 11 percent of annual spending over that time period.

There is opportunity to increase account level reporting of the offsetting receipts. As the government, albeit slowly, works toward completion of a statutorily required inventory of federal programs, taxpayers should be able to easily find this data, rather than having to dig into annual publications of the detailed and technical Analytical Perspectives volume. Chris Edwards, Director of Tax Policy at the Cato Institute, has covered this topic extensively over the years. NTUF agrees with his recommendation: "To increase transparency, CBO and OMB should highlight gross outlays in their main budget tables and charts where the figures would be more visible to reporters and the public."