A recent article published by Forbes touted that the American Rescue Plan (ARP) Act as “one of the biggest one year tax cuts in modern U.S. history” with an alleged $492 billion in reductions this year, surpassing any annual reduction that had been enacted in the Tax Cuts and Jobs Act of 2017 (TCJA) or other post-war tax reduction plans.[1]

This claim is misleading because it conflates tax reductions with transfer payments. A tax cut reduces a filer’s income tax liability, but the bulk of the changes in the ARP Act show up on balance sheets as new spending rather than tax reductions.

Parts of the Act do, in fact, reduce income tax burdens on many filers. For example, the bill exempts a portion of unemployment benefits from income tax and it also includes several tax credits which serve to reduce individual liabilities. However, the bulk of the “tax cuts” underlying the claims in Forbes do not actually reduce anyone’s taxes. Instead, they show up in the budget as spending, including the “recovery rebate” stimulus checks. Also, many of the expanded credits in the bill are refundable, meaning that filers can claim them above and beyond any income tax owed and receive a cash subsidy payment from the Internal Revenue Service.

A true accounting of the provisions finds that a whopping 85 percent – $422 billion – of the purported “tax reductions” for this year in the ARP Act actually occur as spending. The actual revenue reductions in the ARP fall far short of changes made as a result of the tax reforms in the TCJA or other significant post-war tax bills like the Economic Recovery Tax Act of 1981.

The Joint Committee on Taxation (JCT) completed an analysis of the estimated revenue effects of the final version of the ARP Act as amended by the Senate.[2] JCT’s estimate includes a total budgetary impact of $492 billion in FY 2021 and a total of $584 billion through FY 2031. JCT estimates this will have a net fiscal impact of $393.7 billion this year and $16.9 billion in 2022. The 2021 figure represents roughly 80 percent of JCT’s total budgetary score for the year. The largest component of this estimate flows from the recovery rebates, otherwise known as the stimulus checks.

The rebates are set at $1,400 per individual plus $1,400 per dependent, with phase outs on higher-income filers. Like previous stimulus measures, this policy is administered through the Internal Revenue Service (IRS) so that the amounts could be based on a filer’s adjusted gross income and could readily be distributed to individuals. Where possible, the IRS delivers the amount as a direct deposit into a filer’s bank account, otherwise it attempts to send checks through the mail to the address it has on file.

However, the bulk of the scored amount is more akin to spending than a tax reduction, as is reflected in the analysis performed by the Congressional Budget Office (CBO). CBO completed a cost estimate of ARP incorporating JCT’s figures, recording the full 2021 amount of the rebate not as a revenue reduction but as direct spending.[3] In 2022, when the remaining amounts are distributed or claimed via tax forms, CBO records that half of the $16.9 billion as direct spending and the other half as a revenue reduction.

CBO’s analysis shows that over the next two years, the rebate checks will increase spending by $402 billion and reduce revenues by $8.5 billion. In other words, roughly 98 percent of the impact of the checks will be seen on the spending side of the federal ledger while just 2 percent will be seen on the revenue side. The $402 billion represents 69 percent of JCT’s ten-year total score for ARP.

As footnotes in the report indicate, several of the items in JCT’s score also have outlay impacts, i.e. they occur as spending. This is an important distinction to keep in mind when considering how these provisions work. The estimate included twelve refundable credits that result in revenue reductions and spending increases.

These credits reduce a filer’s tax liability, but as CBO describes, “if those credits exceed other tax liabilities, the taxpayer may receive the excess in a refund. Such refunds are classified as outlays in the federal budget.” In essence, refundable credits act as welfare programs providing cash benefits to eligible recipients above and beyond their income tax liability.

As Table 1 shows, the vast majority of these refundable credits exceed the filers’ income tax liabilities and manifest as spending. As additional provisions kick in starting in 2022, the refundable spending costs increase.

As Table 2 shows, the refundability varies across the individual credits. 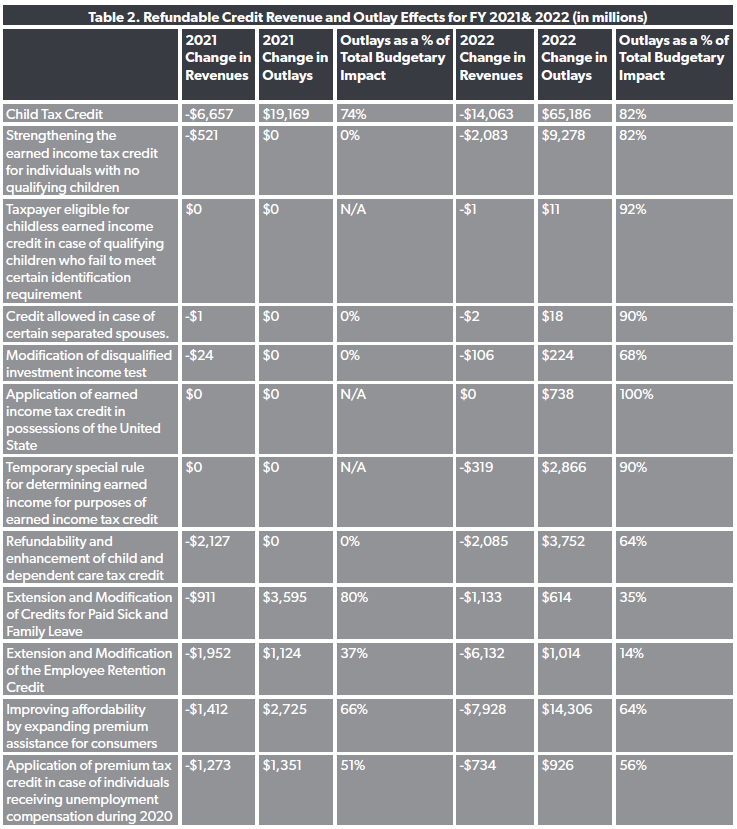 As NTUF noted in a previous issue brief, many of these refundable credit expansions have long been on the wish list of several members of Congress and were included in the ARP Act on a short term basis.[4] Making these permanent would add billions to the ten-year cost of these provisions.

Beyond the recovery rebates and refundable credits, which are spending increases rather than tax reductions, the remaining items in JCT’s score net out to a revenue reduction of $70.5 billion for FY 2021.

The bulk of the remaining revenue reductions in 2021 result from two provisions. Among the larger revenue reductions in the ARP Act without a spending hike directly associated with it is a suspension of income taxes on a portion of unemployment compensation received in 2020, reducing revenues by nearly $25 billion. The law also provides for premium subsidies for certain unemployed individuals to elect for health insurance coverage through the Consolidated Omnibus Budget Reconciliation Act, known as COBRA. JCT estimated this would have a budgetary impact of nearly $27 billion in 2021, including a corresponding outlay savings of $1.4 billion.

IV. Comparison of the ARP Act with TCJA

The author of the Forbes piece argued that the tax reductions in ARP far exceeded the amount provided in any year of the TCJA. But this claim does not stand up after accounting for spending in ARP disguised as tax cuts.

When the TCJA was enacted, JCT estimated that in 2018, the first year of implementation, it would have a net impact of $135.7 billion and it would have an average annual net impact  of $180.8 billion through FY 2025.

The tax changes implemented by the ARP Act and TCJA were designed on different principles. The TCJA of 2017 was the first comprehensive overhaul of the tax code since 1986 and was intended to make America’s tax code less damaging to wealth creation and investment. In other words, it was very much a structural reform with long-term effects in mind. Among its many changes, the law lowered income tax rates across the board, increased the standard deduction, expanded the child tax credit, and reduced the corporate tax to make the U.S. tax code more competitive in comparison to other nations.

Many Democrats have continually attacked the TCJA as a “tax giveaway” to the rich. The wealthy did receive the largest dollar benefits of the law, but that is a byproduct of the steep progressivity of the American income tax; comprehensive tax reductions under a progressive income tax system tend to reduce tax burdens for those who have them, which is generally wealthier people. In 2017, before implementation of the TCJA, the top 25 percent of income earners paid 86 percent of all income taxes. Though largely unreported, the reform bill arguably made the tax code more progressive, shifting a greater share of the burden to higher-income earners.[5]

By contrast, the ARP Act was designed from the beginning to respond to an acute crisis by targeting support to middle- and low-income Americans and to exclude high-income workers, who have generally fared better through COVID-related economic distress. In order to take advantage of a relatively simple means-testing process, this support was routed through the tax code utilizing income tax return data. That decision comes with the side effect of essentially routing hundreds of billions in direct cash subsidies through the tax code to people with income tax burdens that are modest or even non-existent, details about which can be found in NTUF’s annual Who Pays Income Taxes report.[6] As a result, it bears much more resemblance to spending than it does to bona fide tax reduction.

The idea that the ARP Act results in the largest tax cuts in modern history stretches and distorts the concept of a tax cut. Lower tax rates allow Americans to keep more of their earned income, whereas refundable tax credits serve to subsidize some individuals at the expense of others.

[1] Gleckman, Howard. “Biden’s Pandemic Relief Bill Is One Of The Biggest One-Year Tax Cuts In Modern US History.” Forbes. March 16, 2021. Retrieved from https://www.forbes.com/sites/howardgleckman/2021/03/16/bidens-pandemic-relief-bill-is-one-of-the-biggest-one-year-tax-cuts-in-modern-us-history/.