By combining self-reported compliance rates with data on remote businesses, NTUF is able to offer the first preliminary estimate of the number of businesses, employees, and total payroll that is threatened by inability or failure to comply with post-Wayfair obligations. Even without including wholesalers and hybrid businesses, NTUF can estimate that nearly 50,000 remote sellers were out of compliance by the time nearly every state had implemented economic nexus rules.

NTUF has noted in the past just how burdensome those added obligations can be for small businesses without the resources to absorb them. When a business sells into an additional state, there is an additional set of tax definitions, exemptions, and rates to become familiar with. This is only made more difficult by the presence of outlier states like Louisiana and Colorado that disproportionately burden remote sellers with fragmented local sales tax rules.

Compliance is not only difficult, but also costly. The business that NTUF’s Taxpayer Defense Center is representing in its landmark challenge to Louisiana’s byzantine parish system, Halstead Bead, estimates that it spends $2.28 in tax compliance costs for every $1 they remit to states in sales taxes.

Noncompliance is also a serious issue for businesses. Failure to collect and remit sales taxes on behalf of a state is akin to tax fraud. In order to collect unremitted sales taxes from businesses that never collected them in the first place, states can go after not only the assets of the offending business, but also the personal assets of the business’s owners.

To this point, states have not been aggressive in pursuing remote businesses that are noncompliant with their sales tax obligations, but there is little reason to expect that this will continue to be the case indefinitely. States remain flush with money now, but should budgets trend more towards the red in the coming years, cracking down on noncompliant remote sellers will appear a tempting target.

How Many Noncompliant Sellers Are There?

Unfortunately, getting an accurate picture of the number of noncompliant sellers is inherently difficult. The true figures may not come until states begin cracking down in earnest, and legislators must be working on solutions well before then.

Even self-reported figures are not wholly reliable. For one thing, businesses may believe that they are compliant with their obligations under state economic nexus laws, but those states may disagree. A business that claims that it is Wayfair-compliant at a given point in time may be fooling itself.

Another problem is a lack of sufficient data on the number of businesses engaged in remote sales. The North American Industry Classification System (NAICS) until recently differentiated between brick-and-mortar businesses and non-store businesses, but the lines between these two categories are becoming blurred as traditionally brick-and-mortar businesses increasingly offer online shopping options to customers as well. This means that even hybrid businesses can have economic nexus obligations that they may or may not be compliant with.

Nevertheless, focusing entirely on “nonstore” businesses, we can at least begin to establish a preliminary picture of businesses that could be on the hook for unremitted sales taxes in the coming years that were never collected from customers in the first place, so long as we remain cognizant of the limitations of this estimate — namely, that it does not include hybrid businesses and wholesalers.

At the same time, some sales will fall under de minimis thresholds, so not every business with remote sales necessarily has sales tax collection obligations under Wayfair. Nevertheless, the vast majority of remote sellers will likely exceed de minimis economic nexus thresholds in at least one state.

By October of 2019, every state with a sales tax except for Florida, Louisiana, and Missouri had implemented economic nexus rules. By that point, just 29 percent of small businesses (less than 20 employees) reported that they were fully compliant with their obligations under Wayfair — the same percentage that reported that they were aware of the decision and how it affected their tax obligations in the first place. For medium-sized businesses (20-499 employees), self-reported compliance was at 57 percent, while large businesses (500 or more employees) self-reported a 49 percent compliance rate).

Using these figures and NAICS data on nonstore retailers, we can generate estimates for the number of out-of-compliance businesses of each size, and extrapolate that to estimate the number of employees and amount of payroll threatened by Wayfair noncompliance should states crack down.

Though it should again be stressed that this estimate is not intended to be comprehensive nor authoritative, it nonetheless provides eye-opening context to noncompliance polling data. Based on this estimate, nearly 50,000 remote-only businesses, including just under 47,000 small businesses, are in danger of being on the hook for unpaid tax obligations, obligations that would have to come out of the businesses’ (or the business owners’) own pockets.

What’s more, this estimated number of noncompliant businesses support over 400,000 jobs and pay these employees $19.6 billion in wages. Should unpaid tax obligations stemming from a lack of awareness or inability to comply put those remote businesses in a difficult situation, those employees’ jobs could be at risk. 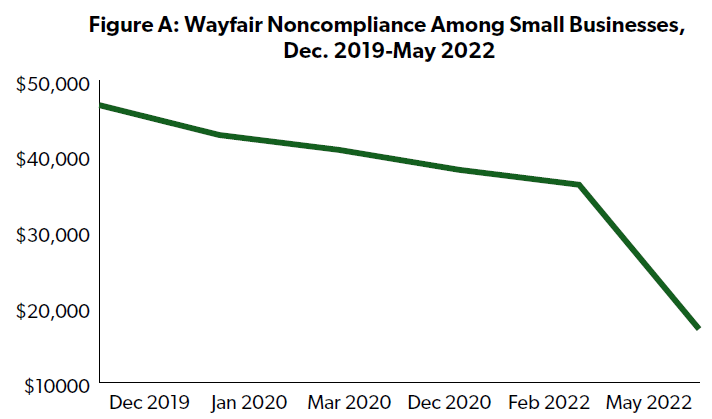 While noncompliance has steadily decreased for small businesses, unfortunately that trend does not hold true for medium businesses (20-499 employees) or large businesses (500+ employees), as Figure B shows. 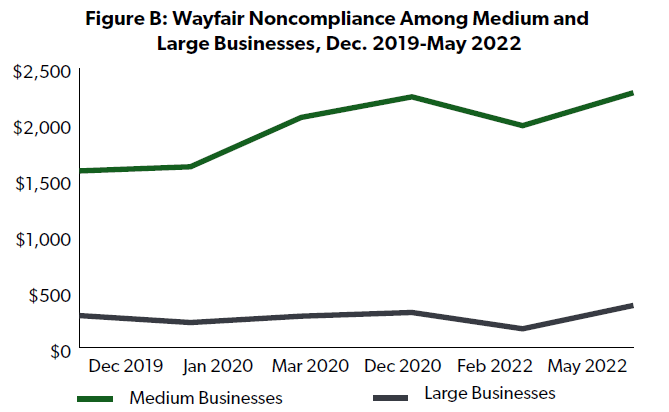 It is difficult to explain this drastic turnaround for both large and small businesses. It is unlikely that small businesses have so suddenly taken control of their economic nexus obligations, though it is more realistic to suggest that large businesses that believed they were in compliance have been made aware of evidence to the contrary. Regardless, it is possible May’s data is simply an outlier. In this case, February’s data may be more enlightening.

While February’s data suggests increased compliance rates relative to December of 2019 across the remote seller industry, those still-high noncompliance numbers suggest that businesses badly need help from legislators to get ahold of their obligations. While overall awareness of the Wayfair decision has ticked up from just over half of all businesses in 2019 to three-quarters in May of 2022 (two thirds in February), businesses continue to struggle to come into compliance.

What’s more, compliance now does not necessarily get a business off the hook. Unpaid and uncollected sales tax obligations from 2019 and 2020 could well become a target of states facing budget shortfalls in the coming years. Absent reform, compliance now won’t save businesses from demand letters in the mail.

With Wayfair just over half a year away from its fifth-year anniversary, states still have yet to make any significant effort towards easing compliance burdens on remote sellers struggling to handle the new reality of economic nexus. Lack of awareness of the scale of the issue is playing its part in that failure.