Over the course of the pandemic, federal relief efforts have seen the debt and annual deficits explode. Trillion-dollar legislation has become even more routine than usual, and the national debt is projected to increase by over $6 trillion over the course of FYs 2020 and 2021 alone.[1] The year isn’t over yet either, with Congress still mulling over a $1.2 trillion bipartisan infrastructure deal and a $3.5 trillion budget.[2]

Given that level of spending, taxpayers would hope that the debt and deficit would be at the forefront of legislators’ minds moving forward. The Congressional Budget Act of 1974 requires the House and Senate Budget Committees to regularly update their respective chambers on the state of the budget, including the impact of recently enacted legislation. This information makes the public aware of whether Congress has exceeded levels set through a budget resolution or other statutory fiscal controls. In recent years, this information has been useful for budget enforcement, allowing committees to track adherence to their allocations and informing each congressional office of enforceable levels and potential violations that may occur against legislation in the future.

Reporting the updated scorekeeping is a fairly simple yet fundamentally important requirement. Unfortunately, Senate Budget Chairman Bernie Sanders (I-VT) has not fulfilled this statutory function to abide by basic standards of transparency and accountability to his colleagues and taxpayers.

Scorekeeping is the process of estimating the budgetary impact of legislative proposals and laws and enforcing statutory limits to spending and revenue levels set in budget resolutions or other legislation.

Budget resolutions reflect an agreement between the House and Senate on tax and spending levels for the next fiscal year and at least four additional years.In practice, these levels are routinely modified each budget cycle. Specifically, the resolution, in the case of a ten-year budget, establishes an overall spending limit for the budget year, a floor for federal revenues for the one, five, and ten-year periods, and spending allocations to each committee.

Resolutions do not have the force of law and are not signed by the president, but require approval by each chamber. This process provides a framework for enacting authorization and appropriation laws, establishes the basis for enforcement of budgetary targets, and permits the use of the reconciliation process.

Once the resolution is agreed to, Congress is tasked with adhering to the budgetary framework. The Congressional Budget Office (CBO) provides estimates for legislation and the Budget Committees track how the legislation would change current law and how that relates to allowable levels under the budget resolution.

There are cases where other laws will take the place of a resolution for scorekeeping and enforcement purposes. For example, the Budget Control Act of 2011 (BCA) set budget caps through 2021, though they were subsequently increased through other laws. For several years, the spending limits set in the BCA (and later amended) took the place of the annual budget resolutions for scorekeeping purposes.

When both chambers approve a budget resolution, it opens up the opportunity to use the reconciliation process. Budget reconciliation bills receive expedited consideration of certain tax and spending changes, as well as enjoying a lower threshold for passage and immunity to the filibuster.

CBO plays a key role in the scorekeeping at multiple points throughout the legislative process. CBO provides budgetary assessments, or scores, of the impact of proposals and enacted legislation on revenues and outlays. Lawmakers and committee chairs often consult with CBO for informal, preliminary cost estimates or technical assistance while they are drafting legislation so that budgetary or scorekeeping concerns can be addressed before consideration.

Under the Congressional Budget Act, any legislation reported by a committee is supposed to include a budget impact score (though there have been cases where the pace of the legislative process in Congress has precluded this). For these, CBO provides formal cost estimates with budget tables. Most of these reports will include an explanation of how CBO determined its estimate along with a discussion of any points of uncertainty in the estimates. CBO also provides cost estimates for appropriations bills. These estimates are not always publicly reported. In the interest of transparency, they should be.[3]

CBO is also required by the Budget Act to produce “up-to-date tabulations” of budget totals on at least a monthly basis, taking into account the latest enacted laws or other congressional budget actions. When asked by NTUF about the frequency and production of these reports, CBO referred NTUF to the budget committees for more information. CBO provides these reports to the congressional committees, but they are otherwise not publicly available unless they are included in a budget committee scoring report.

The Congressional Budget Act also requires the budget committees to periodically release a summary scorekeeping report on the current status of congressional budget actions to their respective chambers. By law, the budget committees should make these reports available on at least a monthly basis, although there are allowances that take into account gaps when either the House or Senate is not in session.

A Senate Budget Committee staffer informed NTUF that it generally takes about a week to exchange information with CBO and it is important to capture all legislation that has cleared both chambers because enforceable levels can change daily. Breaking down the spending impact by each committee can also be time consuming. Recess periods allow time to make sure that all the budget data is up-to-date to present in a scorekeeping report upon the start of the next work period.

Recent scorekeeping reports have typically included an update of the latest aggregate spending and revenue levels and budget authority and outlays by the appropriations committees and each authorizing committee relative to their budgetary allocations (indicating any breaches). The reports also include CBO’s letter to the committee chairs that summarizes and compares the budget impact of recently enacted legislation relative to the budget resolution.

Recent Compliance with the Scorekeeping Requirements 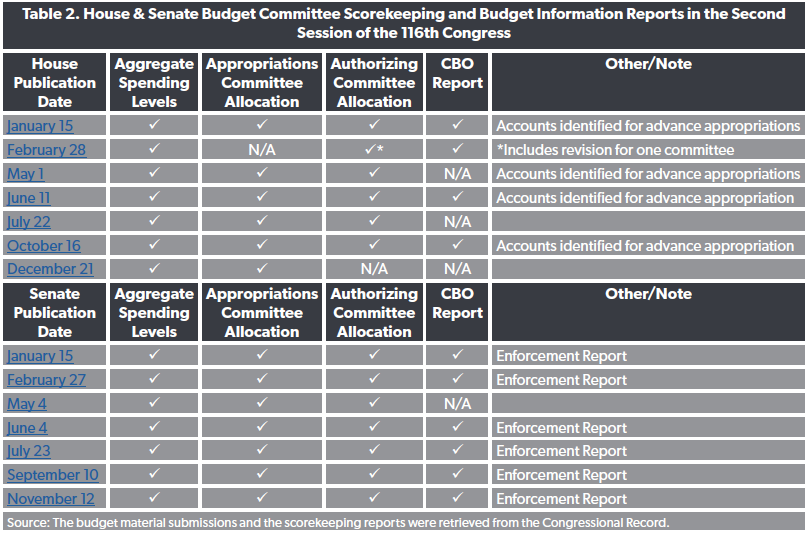 As noted in Table 2, Senator Enzi’s scorekeeping reports would also include an enforcement report. This report would outline which budget rule was violated, the measure against which the point of order was raised, who raised the objection, and whether or not it was waived.

For example, the July 23, 2020 report notes that Enzi raised a point of order against the Great American Outdoors Act for violating a pay-as-you-go budget rule. Sen. Enzi raised a point of order because the CBO estimated the legislation would boost spending by over $17 billion over the next decade and did not include an offset. An amendment to provide for a funding offset through park fees was not approved. As the scorekeeping report shows, the Senate waived the point of order challenge by a vote of 68 to 30.

Senator Enzi’s reports set the gold standard for what should be included in these reports. Additionally, for the first time in 2019, Enzi started posting the scorekeeping report on the Senate Budget Committee website, otherwise they are available in the Congressional Record. Archiving these reports in a single place is a much more user-friendly format than having to search through the Congressional Record. As Enzi said:

Providing regular budgetary updates, like the scorekeeping report, helps foster transparency in the federal spending process. It also helps ensure that Congress is accountable to the American people for how it spends their hard-earned tax dollars.  I look forward to providing these reports regularly to help ensure Congress remains focused on fiscal responsibility.[4]

The budget committees should streamline how this information is made available to make it easier to find. One issue is that the committee chairs use different terminology when inserting these reports into the Congressional Record. Using common language would make it easier for the public to locate these reports.

To improve visibility, House and Senate budget committees should follow Senator Enzi’s example and publish these scorekeeping reports on their websites. A permanent site would make it much easier for the public to locate these reports, monitor the latest updates to budget data, and see how committees and Congress as a whole are responding to historic deficit levels.

This idea was included in the Bipartisan Congressional Budget Reform Act of 2019, co-sponsored by Senator Enzi and Sheldon Whitehouse (D-RI) during the last Congress.[5] The legislation would have required that the reports are posted to the committee websites in addition to being submitted in the Congressional Record.

The proposal would have also increased the frequency of the reports to be at least bi-monthly. This would ensure that lawmakers have the most up-to-date budget information while considering new legislation and enforcement.

The budget data available to Congress should be as accurate as possible in addition to being timely. CBO’s cost estimates can sometimes miss the mark, especially in the case when it is tasked with scoring complex bills with several interacting variables. This year’s budget proposal from the Republican Study Committee (RSC) would require a vote to reauthorize a mandatory spending program (excluding entitlements such as Social Security and Medicare that are financed through trust funds) when “when actual spending exceeds [CBO’s] expectations by a certain percentage.”[6]

Enforcement efforts could also be strengthened. An additional reform in the RSC package would implement a new point of order against emergency spending that would result in outlays beyond the first two years, with the argument being that such spending should be temporary and timely.

There are points of order against legislation with new budget authority from the appropriations committee if it has not yet filed its subcommittee allocations and also against legislation that would exceed an authorization committee’s allocation. Additional points of order could be made against new authority and outlays if the budget committee has failed to produce a scorekeeping report for at least 30 calendar days. To the extent practicable, Congress should be aware of the latest budget totals when considering new spending.

Points of order are not self-enforcing, meaning that a member has to raise an objection before it will be addressed through a vote by the chamber in which it is raised. In most cases, points of order require 60 votes to be waived. Given that the level of debt is on track to exceed the size of the U.S. GDP, Congress should consider making certain points of order self-enforcing if the deficit or debt exceeds a certain percentage of GDP. Members would still have the option to waive these points of order, but like the recurrence of the debt ceiling issue, it would be a constant reminder to members of Congress that they are spending too much.

Lawmakers urgently need a successor to the BCA. Though Congress has increased its caps several times, the BCA was successful in re-setting budget outlays on a lower trajectory. New spending caps and comprehensive budget process reforms are needed to tackle the government’s surging debt.

Abiding by the scorekeeping is a simple requirement and should be a regular priority for budget committees. The neglect of these relatively minor yet easy obligations sends a message to taxpayers that there is a lack of seriousness about addressing runaway spending. Upholding this basic standard of accountability and transparency would not instantly fix the deficit, but would represent a small but important step toward fixing the budget process.

Building on this simple requirement by improving the level of detail in the reports, making them easier to find, and strengthening enforcement measures would also provide a fitting tribute to the legacy of Senator Enzi, who took the lead on scorekeeping transparency and budget reform.