Earlier this year we wrote about the gimmicks crammed into the Bipartisan Budget Act of 2018 (BBA) that disguised the true cost of the deal as it eliminated spending caps that were effective in reining in deficits. One of those gimmicks warrants extra attention. Through the BBA lawmakers found a novel way to inflate the baseline for farm programs: disaster relief provided for dairy and cotton producers helped ensure that these commodities will not have to compete for scarce resources as Congress takes up reauthorization of the Farm Bill before the end of the year.

Work on the farm bill reauthorization has started to pick up steam. Two weeks ago, the Congressional Budget Office (CBO) published a cost analysis of the House’s farm bill to reauthorize commodity and nutrition programs. Figure 1 below shows the net annual changes in outlays and revenues in H.R. 2, the Agriculture and Nutrition Act of 2018. 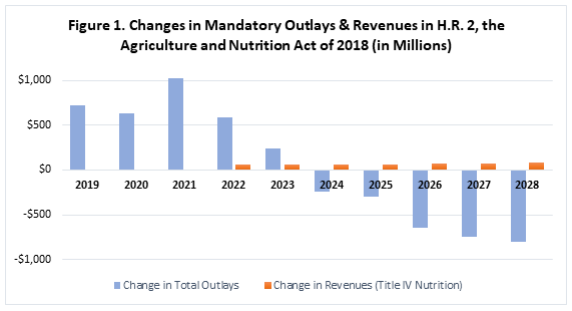 Over the first five years spending would climb by $3.2 billion and would be cut by $2.7 billion from 2024 through 2028. In total, spending would be $458 million higher over the ten-year budget window. A projected boost in revenues by $465 million over the decade would, on net, shrink the deficit by $7 million.

In order to make sense of what those dollar figures mean, it is necessary to understand the baseline that the farm bill is compared against.

On April 9, CBO updated its baseline projection for the Supplemental Nutrition Assistance Program and the farm programs to be reauthorized through the farm bill.  The baseline shows CBO’s projection of outlays over the next decade, assuming continuation of the listed programs under current law. The impact on spending included in the text of the farm bill is then measured against the spending pre-built into CBO’s baseline.

This means that under the budgetary “pay-as-you-go” rules used to score legislative changes to mandatory spending, programs included in the baseline have their funding basically locked in. Simple reauthorizations through the farm bill won’t result in a score because the spending is already assumed to take place. Programs left out of the baseline, or any expansion of existing programs would then have to compete for scarce budgetary resources – each dollar increase in one program must be offset in another area of the bill.

Over the past several months, there was an intense effort to get cotton and dairy programs included in the baseline before CBO reported its numbers. Cotton and dairy producers have been pushing for higher subsidies since the passage of the last farm bill in 2014. After cotton subsidies were determined to be in violation of the US’s international trade agreements, cottonseed was removed from the Agriculture Risk Coverage and Price Loss Coverage assistance programs in the 2014 farm bill. Instead, Congress created two new programs for cotton: the Stacked Income Protection Plan and the Cotton Transition Assistance Program. Because the replacement programs were less generous, the cotton industry urged then-Secretary of Agriculture Vilsack to reclassify cottonseed as an oilseed, which would restore the more expensive federal payments. But he declined, stating that it was clearly Congress’s intention that cotton should be covered under the newer programs.

Similarly, dairy farmers were disappointed with the benefits provided through the 2014 farm bill have been seeking for higher federal subsidies, and also requested a reclassification to define milk as a crop as a way to skirt a cap on available livestock assistance.

Time was running out to get higher subsidies added to the farm bill baseline, but the years of lobbying paid off in the BBA. The February budget deal amended the farm programs through disaster relief provisions providing $1.2 billion in funding for dairy and $2.9 billion for cotton.

This provided a “free lunch” since, once in the baseline, supporters of the programs and commodities won’t have to fight for dollars from other programs. Moreover, this opened a new avenue of baseline manipulation. As scholars at the University of Illinois’ Institute of Agricultural and Consumer Economics described it:

[I]t has to be acknowledged that this proposal is a highly unusual and potentially consequential change to farm policy. It sets a rare precedent by opening a farm bill and revising the standing statutory provisions through any appropriations vehicle; more so given it is a temporary supplemental appropriation for natural disasters.

In a boost for transparency, CBO did provide the baseline outlay totals in its report of the farm bill this year, making that data more readily available to non-experts trying to understand the budgetary impact of the legislation. 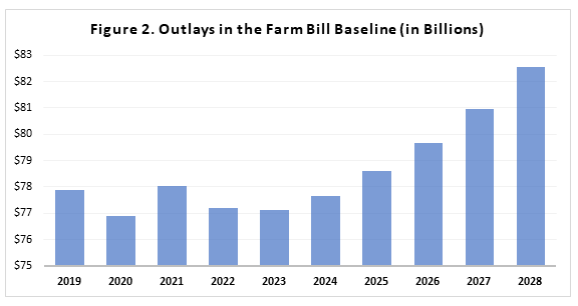 However, through this process lawmakers have ceded part of their power of the purse, allowing an agency, rather than Congress, to determine how much spending will occur under the farm bill. Rather than addressing the net impact of all the spending resulting from the farm bill, the baseline effectively provides the upper limit on spending. As the farm bill is considered, the debate then is stuck within the confines CBO’s figures instead of addressing the rising costs built into the baseline, and even more importantly, assessing and weighing total farm bill spending against other budgetary priorities.