The Congressional Budget Office (CBO) released a pair of reports updating the agency’s outlook for the federal budget. As expected, the pandemic, social distancing mandates, and federal legislation enacted since March have significantly worsened an already grim budget outlook. This year, the federal government will run its biggest deficits since World War II and its publicly held debt is on track to overtake the economy in 2023. CBO did take two important steps in its update in order to report more accurate budget data, but there are still many factors, especially the likelihood of even more new spending from Congress, that could further worsen the budget outlook. Significant action will be needed from lawmakers to deflate the ballooning federal debt. 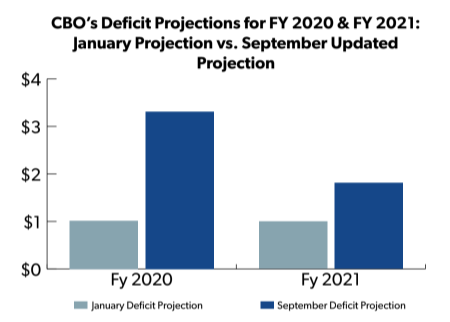 The fiscal year had already started out on rocky ground with deficits projecting to exceed $1 trillion, but the pandemic and legislative responses have sent the 2020 shortfall soaring to over $3.3 trillion, net of $6.6 trillion in outlays and $3.3 trillion in revenues.[1]

Federal debt held by the public is estimated to reach $20.3 trillion this year, closing in on the U.S.’s GDP of $20.6 trillion. By 2023, federal debt will swell to 107 percent of GDP, the highest in history. In 1946, just after World War II, the debt reached 106 percent of GDP. By comparison, CBO’s long-term outlook published in January did not see debt surpassing the size of the economy until 2031.[4]

In addition to the budget outlook, CBO produced a separate report on The Outlook for Major Federal Trust Funds: 2020 to 2030.[5] These face serious shortfalls and the trust funds for major entitlement programs will be exhausted sooner than previously projected:

If the trust funds are depleted, designated excise and payroll taxes will still be collected but the funds would not have authority to make payment above the level of those revenues.

CBO Made Revisions to Methodology

In order to report more accurate data, CBO made two key deviations from its methodology for producing the budget baseline. Under congressional budget scoring rules, CBO normally produces a so-called “current law” baseline, which assumes that spending and revenues occur exactly as prescribed in law. But as NTUF has repeatedly pointed out, this method does not take into account policies that Congress tends to actually enact. For example, there are several tax provisions set to expire under current law that are typically extended, meaning that the current law baseline is counting on revenues that won’t be there. Current law baselines also tend to under-report projected spending levels because of statutory spending caps in place through FY 2021. Congress has revised these caps to allow for higher spending several times since they were initially enacted in 2010.

This year, the current law baseline for discretionary spending presented an additional problem. Normally, CBO assumes that these outlays will continue at current levels with adjustments for inflation. Since March, however, Congress has enacted several emergency spending packages in response to the pandemic and economic crises that represent a much higher than normal level of spending.

In consultation with the House and Senate budget committees, CBO corrected for this anomaly by excluding $471 billion in discretionary budget authority from future years in the baseline because of the “unusual size and nature of the emergency spending.” Since CBO scores legislation to its baseline and Congress uses these figures for budget enforcement purposes, leaving this uncorrected would create space for billions of dollars of higher spending in the future.

In addition, when CBO updates its baseline projection, it takes into account legislation enacted by Congress during the time since it produced its previous outlook. It normally uses the original cost estimates produced at the time the legislation was enacted. However, given the magnitude of the emergency response legislation, CBO updated cost estimates for certain new programs including the Paycheck Protection Program and the expansion of unemployment benefits. CBO noted that updating legislative cost estimates “is often difficult, particularly when the budgetary effects of that legislation cannot be separately identified. However, in preparing its baseline projections for this report, the agency had enough new information to update its estimates for some components of legislation enacted since March.”

This important change ensures that CBO’s new report includes the most up-to-date information about the fiscal impacts of recently-passed emergency measures.

The Budget Outlook Could Worsen

Toward the end of its report CBO briefly discusses the uncertainty entailed in the latest projections. While there is always a degree of uncertainty involved in producing a budget outlook for ten years, the problems are especially acute this year, with factors including:

These factors could significantly alter the actual path of interest rates, inflation, and productivity growth from what CBO has projected. The agency analyzed its past projections and estimated that there is a two-thirds chance that the FY 2021 deficit will be between 7.6 percent and 9.7 percent of GDP, compared to the baseline estimate of 8.6 percent. Under this worst-case scenario, next year’s shortfall could exceed $2 trillion.

In previous years, CBO’s budget outlooks and updates would include a section discussing alternative fiscal scenarios, with projections using current-policy assumptions that would present more realistic budget data than the traditional “current law” baseline mandated by Congress. Such a “corrected” baseline is not included in the latest update, but there are several additional factors that could lead to different budgetary outcomes than projected:

FY 2021 will be the last year of the 2010 Budget Control Act’s caps on certain mandatory and discretionary spending. Although Congress did frequently revisit and lift the caps, the budget restraints did manage to reset spending on a lower trajectory after the surge in outlays after the 2008-2009 financial crisis.[10] Most of the policy making agenda is currently focused on the possibility of enacting yet another pandemic response package. Lawmakers also must pass appropriations or a stopgap measure for FY 2021 by October 1 to prevent yet another government shutdown.

While most of Congresses’ legislative workload, as noted above, is heavy on new spending initiatives, there has also been important bipartisan work on budget reforms. Earlier this Congress Senators Michael Enzi (R-WI) and Sheldon Whitehouse (D-RI) worked together on S. 2765, the Bipartisan Congressional Budget Reform Act of 2019, the most significant budget process reform to be approved by the budget committee since 1990.

More recently, a bipartisan group of 60 Representatives joined to sign a letter to House leaders urging that any additional coronavirus-related spending bills include a process to establish a bicameral committee to address ways to address the growing debt and fiscal threats to trust funds.[11]

Specific reforms – such as the $800 billion in savings detailed in NTUF’s and the U.S. PIRG Education Fund’s Toward Common Ground report – will be needed to root out waste in the budget and slow or reverse the growth in spending while implementing tax and regulatory policies to promote economic growth.[12]

[3] Caleb, Silver. “The Top 20 Economies in the World.” Investopedia, Mar 18, 2020. Retrieved from: https://www.investopedia.com/insights/worlds-top-economies/.