Taxpayers are providing up to $4 million a year in subsidies to former U.S. presidents. This largesse is provided even though the four living members of this exclusive club have net worths ranging from $8 million to $135 million, and the next former president is estimated to be a billionaire.

As public servants, former presidents may be deserving of a pension and security support, but the expensive perks do not end there. Former chief executives should understand that with massive federal deficits, it would be prudent to find budget cuts wherever possible.

The Former Presidents Act of 1958: Financial Relief for Truman

Many of these perks were established in the mid-20th Century primarily to help the hard luck case of President Harry Truman, one of the few U.S. presidents without significant personal wealth. A failed business venture in the early 1920s left him deep in debt before he turned to a career of public service. To help boost Truman’s income just a few days before he was sworn in to his second term in the White House, the Democrat-controlled 81st Congress increased the presidential salary by $25,000 to $100,000 ($1,084,950 in 2020 dollars).

According to tax files made available by the Truman Presidential Library, Truman’s income sank from $100,539.06 in his last year of office to $13,564.74 in 1954.[1] Still, he was better off than many Americans: at the time, the median family income in the United States was estimated at $4,200 in 1954.[2] Although Truman’s income rebounded over the next several years after he published his memoirs and sold his father’s farm, Congress enacted the Former Presidents Act (FPA) of 1958 to provide retirement benefits and office assistance to ex-presidents.

To track how much taxpayers have paid out for former presidents, NTU Foundation gathered data from a 2016 Congressional Research Service (CRS) report which showed the net totals provided to former presidents from 2000 through 2015.[3] These figures were converted to 2020 dollars and supplemented with annual budget data from the General Services Administration (GSA) which oversees the FPA.[4] This data also shows how much was provided to the presidents for the various benefits and services.

From 2000-2020, a total of $56 million in perks and benefits was provided to the four living former presidents, with 44 percent of that amount going to President William Clinton. To date, the highest average amount of yearly payments has been paid to President George W. Bush at nearly $1.3 million per year. At $605,000 per year, President Jimmy Carter’s subsidies are less than half of Bush’s. Over the same period, taxpayers provided an additional $28.8 million in benefits to now deceased former presidents and widowed first ladies.

The biggest personal benefit to which former presidents are entitled is an annual pension equal to the pay for a Cabinet Secretary, which is $219,200 in 2020.[5] They are also eligible for additional supports, like health benefits, provided that they had been enrolled in the Federal Employees Health Benefits program for at least five years, and health annuities similar to all federal employees. Because Jimmy Carter only served a single term and did not hold another federal position, he is not eligible.

Starting six months after a president leaves office, the General Services Administration (GSA) provides funding to establish, furnish, and staff an official office anywhere in the U.S. The Former Presidents Act does not “provide specifications or limitations pertaining to the size or location of a former President’s office space.”[6] Staff compensation is limited to $150,000 for the first 30 months, then capped at $96,000 per year.

Office rental has become the largest source of costs because of the large office spaces maintained by Presidents Bill Clinton, George W. Bush, and Barack Obama in expensive cities. Rent accounted for 43 percent of total costs over the past few years. Since 2015, taxpayers have shelled out $3.1 million to subsidize Clinton’s office space in New York City.

Another issue raised by GAO is that the presidential offices are often located at the same location as the foundations set up by the presidents:

This raises concerns that taxpayers are not just subsidizing the presidential offices, which ostensibly supports activities related to their official duties and responsibilities as former heads of state, but are also subsidizing the administration of their personal, charitable endeavors.

According to CRS, this category includes funding for security payments to the Department for Homeland Security for lease location, license and support hours for contracting of services, postage for franked mail, furniture moves, and disposal costs. The GSA’s annual budget documents also note that Personnel Compensation and Benefits for former President Carter are provided by contract support categorized under Other Services. This explains why Carter’s $613,000 total in this category is significantly larger than the other former presidents, ranging from $130,000 (Obama) to $268,000 (Bush).

Former presidents also get support for communications, which, according to CRS, can include “cable, phone, and UPS/Fedex charges.”[8] In this category, President George W. Bush has charged taxpayers the most since 2015, with $618,000 in communication costs.

According to CRS, this category includes “furniture or information technology hardware or software and the related installation.” Carter has had no charges in this category since 2015. It is unclear whether the annual charges from the other former presidents for equipment averaging $29,000 per year means that equipment is being leased.

Chief Executives and up to two staff members are reimbursed for up to $1 million in security and travel-related costs annually. Former First Ladies also are eligible for $500,000 per year for official travel. The travel benefit is one of the cheaper perks provided by taxpayers. Clinton and Carter have not charged taxpayers for any travel over the period 2015 through 2020. During that period, taxpayers supported $63,000 for Bush’s travels and $24,000 for Obama.

Presidents are eligible for lifetime security protection, though they have the option to decline it. This protection is also offered to their spouses and minors under the age of 16. The status of the provision of security and the costs are classified. According to the GAO, the Secret Service maintains space close to the presidential offices and pays rent to the GSA. 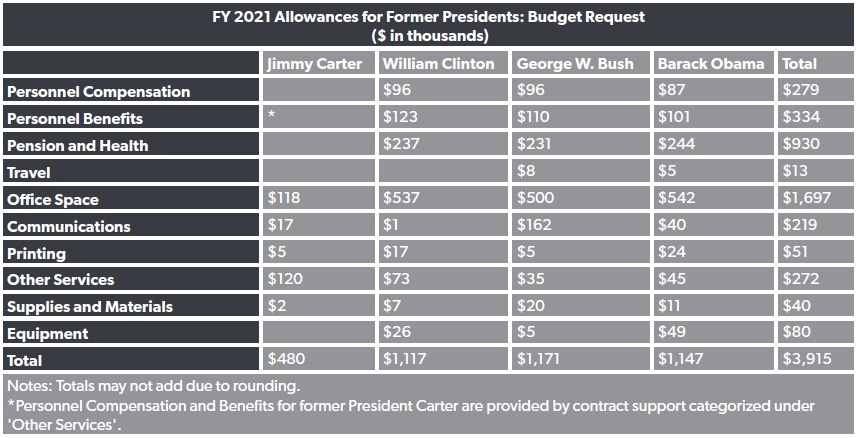 It should be remembered that these subsidies are being provided despite the great personal wealth of the former presidents. Upon leaving office, modern presidents can build personal brands and have multiple ways of generating income through pricey speaking fees, lucrative book deals, and media production contracts for streaming services. USA Today estimates that the net worths of the current former presidents range from $8 million for Carter to $135 million for Obama.[9] Trump, the next president set to join this exclusive club, has a net worth estimated by Forbes at $2.5 billion.[10] 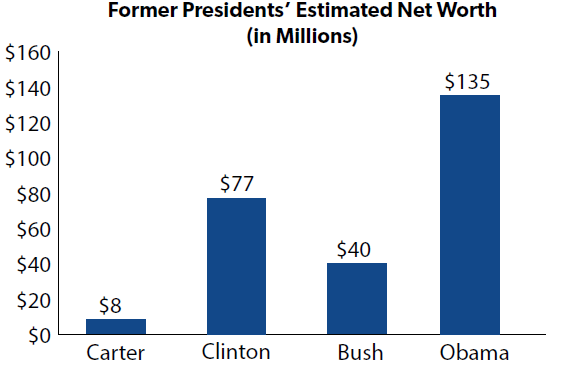 To reduce costs to taxpayers for ex-presidents, Rep. Jody Hice (R-GA) and Sen. Joni Ernst (R-IA) introduced reform legislation. The Presidential Allowance Modernization Act of 2019 (H.R. 1496 and S. 580) would limit the pension a president could receive to $200,000 annually, with the amount being indexed to inflation.[11]

It would also limit the cost to taxpayers for expenses such as office space and leases, furniture, and supplies, as well as staff salaries to a lump monetary sum of $200,000 per year. The allowance would be reduced dollar for dollar by the amount that a president’s adjusted gross income exceeds $400,000. The proposal would leave intact current healthcare benefits and Secret Service protection.

The House bill was passed by voice vote on October 16, 2019. The Senate bill was approved by the Committee on Homeland Security and Governmental Affairs on June 27, 2019. The Congressional Budget Office (CBO) estimated that House’s version would reduce pension costs by $20,000 per year and the allowance limit would save $2 million over five years. The savings in the Senate’s version is smaller because it would only apply to future former presidents and would not roll back the subsidies currently being provided to the four former presidents.

Reforming presidential perks is not going to balance the budget on its own, given the sheer size of the federal government’s budget deficit. However, every dollar counts given how hard taxpayers have to work to pay government’s bills, and any effort to trim the federal budget must first embark on the “easy” reforms while working toward resolution on more difficult ones like entitlement programs. That is why this reform proposal was included in NTU Foundation’s joint project with the U.S. Public Interest Research Group Education Fund to reduce budget outlays by more than $790 billion.[12]

In 2018, Congress worked to cut off lavish office and staff benefits provided since 1970 to former speakers of the House. The proposed reforms to similar perks for former presidents represent a minimum that should be enacted to save taxpayers from subsidizing millionaires. The generous package of perks should be scaled back so they are not provided in perpetuity or commingled with the presidents’ private foundations. A previous version of the Presidential Allowance Modernization Act was passed by both chambers in 2016 but was vetoed by President Obama just six months before he was set to leave office. If Congress were to tackle this problem again in the lame duck, it could make some modest progress toward rationalizing presidential benefits and reducing taxpayer costs.

[5] Office of Personnel Management. (2020). Salary Table No. 2020-EX: Rates of Basic Pay for the Executive Schedule. Retrieved from: https://www.opm.gov/policy-data-oversight/pay-leave/salaries-wages/salary-tables/pdf/2020/EX.pdf.