In response to the COVID-19 pandemic, Congress enacted a record amount of emergency spending in relatively short order. Combined, the four relief packages provided over $2.4 trillion in relief for health care and for programs to forestall a feared economic depression. A common refrain which still echoes is that “now is not the time for deficit reduction.” There is a good argument for applying this rule to legislation addressing the immediate health and economic crisis, but an overview of Congress’s recent legislative workload shows that lawmakers are applying it across the board.

An analysis of recent cost estimates published by the Congressional Budget Office (CBO) finds an agenda heavy on new spending. Thirty-six of the 53 legislative estimates published over the past six weeks included additional costs for taxpayers. The cost estimate with the largest price tag was for House Democrats’ Health and Economic Recovery Omnibus Emergency Solutions (HEROES) Act, which would hike outlays by over $3 trillion. The Patient Protection and Affordable Care Enhancement Act (PPACE Act) would increase five-year outlays by over $167 billion. The remaining bills would boost spending by over $17 billion over the next five years.

Most of these proposals were sent for scoring before mid-March when quarantines and economic lockdown policies went into effect and deficits exploded. But long before “coronavirus” was a household word, lawmakers were warned by CBO of trillion-dollar single-year deficits as far as the eye can see and significant debt problems in the future. The annual deficit is now likely to surpass $4 trillion, but there is little evidence that lawmakers are taking the larger deficit into consideration. The snapshot of Congress’s workload through CBO’s cost estimate is indicative of how little thought is put into finding ways to offset spending.

NTUF examined CBO’s  cost estimates over a six week period, from May 15 through June 26,  for their net five-year impact on spending and to identify whether each underlying proposal was creating a new program, activity, or regulation, or whether it was expanding an existing program. During this period, CBO released 57 cost estimates for legislative proposals.[1] Three of the reports were excluded from this analysis because they only pertained to the minimal direct spending and revenue impacts of the proposals. These reports did not include an estimate of the significant discretionary spending included in the proposals.[2] The initial June 24 cost estimate for the House Democrat’s PPACE Act was excluded because the proposal  was subsequently amended and re-examined by CBO on June 26.[3]

Thirty-six legislative proposals – two-thirds of the 53 most recently published cost estimates – would increase spending. Ten of these increase spending levels of existing programs, 20 create new programs or activities, and six bills would do both.

By far, the most expensive of the bills recently analyzed by CBO was the HEROES Act, passed by the House on May 15, 2020. CBO estimated it would result in a $3.1 trillion surge in spending. As NTUF noted in a recent issue brief, the bill is loaded with spending unrelated to the current crisis.[4]

As noted, the PPACE Act would boost outlays by $167.4 billion over the next five years. The bill, passed by the House on June 29, would permanently expand the Affordable Care Act and create taxpayer-backed incentives for a significant expansion of Medicaid. Among the recent bills scored by CBO, this is the only proposal that includes a net spending offset. However, the net outlay savings occur outside of the five-year window and are highly suspect.

On paper, CBO’s cost estimate determined that the bill would, on net, reduce outlays over ten years, primarily due to a provision to establish a price negotiation regime for drugs in Medicare plans. Rather than providing for an actual negotiation, the bill would create a price-setting scheme. Manufacturers that do not comply would be hit with a massive excise tax. Under CBO’s estimate, these provisions would reduce federal spending by nearly $529 billion over the decade, with 93 percent of savings appearing in the latter years of the projection. In a letter regarding an earlier version of the proposal in H.R. 3, CBO noted several points of uncertainty regarding the savings estimate, including the possibility that pharmaceutical manufacturers “might respond to the negotiation process in ways that CBO has not considered.”[5] CBO also noted that there would be an impact on innovation with fewer drugs coming to market. Any drugs newly launched on the market would likely have significantly higher prices as well.

The third most expensive cost estimate was for the Great American Outdoors Act, which was passed by the Senate on June 17, 2020. This proposal would create a new fund to pay for maintenance in federal parks and lands and provide permanent funding for a separate conservation fund. CBO estimates that it would boost spending by nearly $6 billion over the next five years and its cost would top $17 billion over the decade. An amendment to provide for a funding offset through park fees was not approved, and the Senate voted to waive budgetary enforcement rules on the floor so that the package could move forward.

The remaining bills would increase outlays by a net of $5.5 billion over five years, including a boost in spending for NASA, new energy research grants, statehood for Washington, D.C., and new conservation programs. A summary of the twelve most expensive bills is included in Table 1 below. 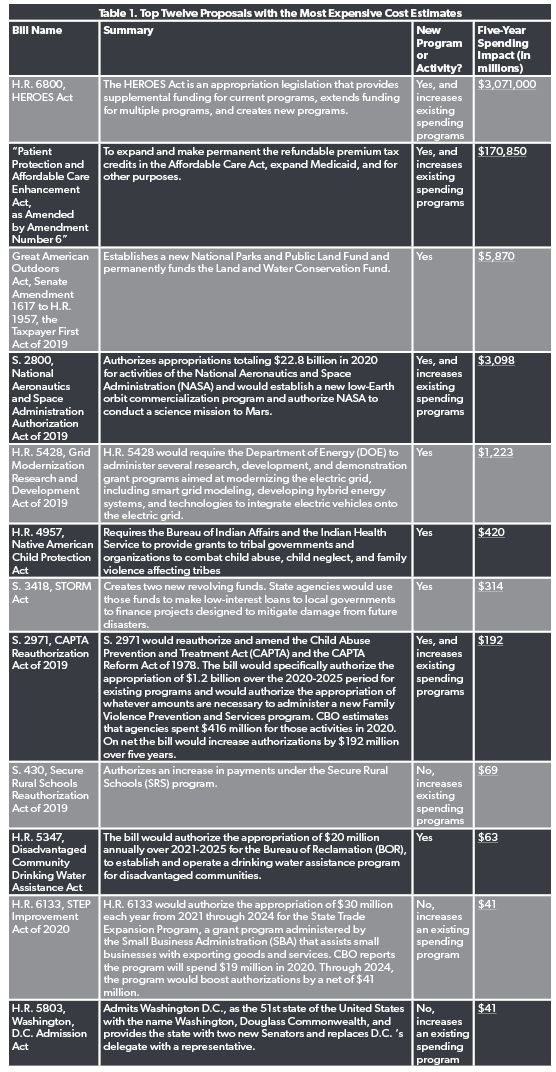 The remaining 17 bills had either little or no impact on the budget, including six bills to create a new federal program or activity, including a low-cost study and a new reporting requirement that would increase administrative expenses, but the agency has authority to impose user fees. 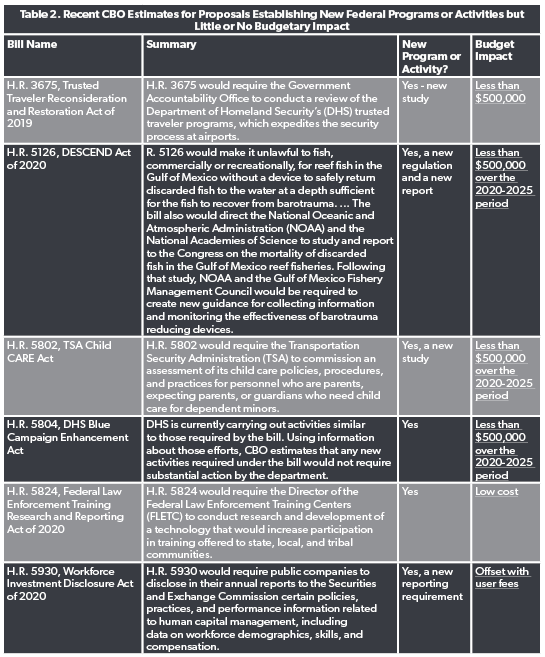 The remaining eleven bills with no significant impact on spending include proposals to:

The Budget Outlook Was Already Terrible before the Pandemic

Most of these cost estimates were published pursuant to Congressional action on legislation before mid-March when social distancing policies went into effect around the nation. CBO had already warned of massive deficits for 2020 long before the worst of COVID-19’s health and economic impacts. CBO regularly produces budget outlooks and since at least spring of 2018, the agency has warned that annual deficits could regularly exceed $1 trillion. 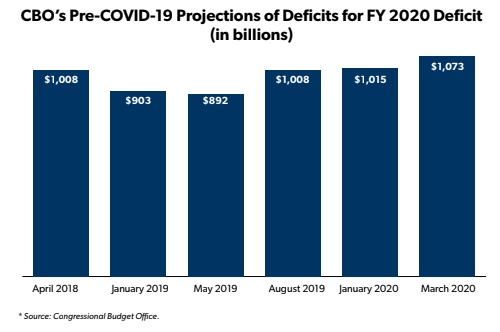 Nevertheless, CBO’s recent cost estimates illustrate that Congress has paid little heed to runaway spending despite the forecast of a trillion dollar deficit. Because of the pandemic, the budget situation is now dramatically more precarious. CBO estimates that the four major bills enacted in response to the pandemic and social distancing restrictions will add $2.4 trillion to the deficit. There could also be further revenue hits as economic activity and employment lag significantly behind what was expected prior to the spread of COVID-19.

But even under the post-coronavirus fiscal reality, there have been attempts to re-classify funding for ongoing programs as “emergency spending” in order to skirt budget enforcement procedures. Additional proposals like the HEROES Act and the Great American Outdoor Act as scored by CBO, plus a recently-unveiled $500 billion dollar House bill package for infrastructure and a bicameral “Endless Frontier Act” proposal for $110 billion new research spending, show there’s little attention to protecting taxpayers from massive tax hikes down the road to pay for spending today.

Congress has a ready explanation for recent spending to combat the worst health and economic impacts of COVID-19. However, CBO’s analyses show legislators have paid little attention to trimming other spending even in the face of calamitous debt levels. Moving forward, Congress must begin the difficult work of cutting expenditures to save taxpayers from a fiscal disaster to match the public health disaster they’re suffering through today.

[1] CBO’s cost estimates were obtained from a browsable directory on its website, https://www.cbo.gov/cost-estimates.

[3] The amendment would, on net, decrease the five-year cost of the original version by over $4 billion by making recipients of Deferred Action for Childhood Arrivals to eligibility for certain benefits in the bill (an increase of $3.5 billion), decreasing by one-year a provision in section 204 providing for primary care pay increase (a decrease of $9 billion relative to the original version) and adding new spending for supporting increased innovation ($1.98 billion).