On the campaign trail, Democratic Presidential candidate Joe Biden has been touting his “Build Back Better” plan for economic recovery as just one component of his extensive list of policy proposals. A detailed, line-by-line analysis of Biden’s platform finds that his campaign promises would boost federal spending by over $1.3 trillion per year. That figure surpasses the original $1 trillion deficit projection for this year before the impact of the pandemic and fiscal responses from Congress tripled this year's shortfall to over $3 trillion.[1]

During his career, Biden has built a reputation as a moderate. However, in comparison to the leading Democratic primary candidates from 2016, the cost of Biden's 2020 spending platform puts him much closer to Senator Bernie Sanders than to former Secretary of State Hillary Clinton. Biden's platform also includes 68 proposals whose cost estimates are currently indeterminate, meaning the final price tag of his plan could be even higher.

Candidates make a lot of promises during a campaign, but they don't always say how much they would cost. To help inform taxpayers about the potential fiscal impact, NTUF has analyzed the spending platforms of  presidential candidates since the race for the White House in 2000. NTUF candidate spending studies compile all the key proposals -- as outlined on candidate websites, in their official campaign documents, and touted in speeches -- into a detailed line-by-line analysis of their potential impact on spending.

This year, NTUF reviewed the 48 issue pages in the Joe's Vision section of Democratic Presidential Nominee Joe Biden’s campaign website for policy proposals that would lead to a net change in federal outlays.[2] For proposals to expand an existing program, NTUF used a current policy baseline where possible, by comparing the net change in spending to existing funding levels (excluding emergency and supplemental appropriations enacted this year in response to the COVID-19 pandemic) available in federal agency documents. Cost estimates for changes to refundable credits only include outlay estimates for the refundable portion, i.e., payments where the credits exceed tax liability. Because many of the individual proposals are scored over different time frames, we report here an annualized cost to contextualize the spending.

The Biden campaign provided estimates for several proposals. Where an estimate was not provided, NTUF matched up the proposals with legislation in Congress (except where noted, the cited bills are from the current 116th Congress) and used data from the Congressional Budget Office (CBO), the Office of Management and Budget (OMB), budget information provided by federal agencies, and other independent, third party sources.

Biden's Vision also included five platforms with recommendations for immediate response to the COVID-19 pandemic that were excluded from this analysis.

As noted, Biden's agenda is laid out over 48 issue pages covering multiple issue areas. Included are also several additional pages focused on specific demographic groups of voters; for the most part these pages repackage and highlight his major proposals listed elsewhere, but they also occasionally include new initiatives not listed elsewhere. The tables below summarize Biden's proposals by issue area, and highlight the top ten items with the largest price tag. Detailed line-by-line analysis of each proposal is available at ntu.org/biden-agenda.[3] 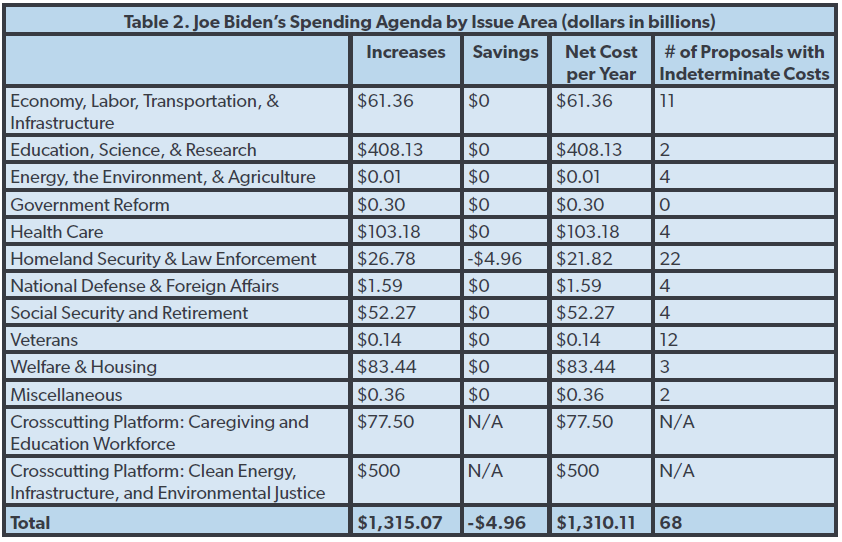 Biden's proposals include two items with estimated reductions in spending. He calls to “reprioritize money away from the Department of Homeland Security’s budget for detention … in favor of more effective and cost-efficient alternatives to detention.” This was offered as an offset to a proposed four-year, $4 billion increase in foreign aid to Central America.[6]

Additionally, he proposes to “decriminalize the use of cannabis and automatically expunge all prior cannabis use convictions.”[7] Jeff Miron of the Cato Institute estimated that federal expenditures related to the prohibition of marijuana totaled $3.96 billion.[8]

Biden also would “end, once and for all, the federal crack and powder cocaine disparity.”[9] Legislation enacted in 2010 reduced the disparity and a 2018 law extended the reduction retroactively for a combined annual savings of $30 million.[10] This could further reduce federal spending through the Bureau of Prisons but a cost estimate is currently not available.

Biden gave a net cost of $750 billion for a health care reform package which included provisions to expand coverage under the Affordable Care Act, Medicare, and Medicaid. It also included several proposals related to prescription drug prices.[11] Some of the elements could lead to reductions in spending. To the extent they achieve reductions in spending, NTUF assumes they would be offset by increases elsewhere in the plan.

There could also be some side effects of these measures. For example, Biden proposes to “repeal the existing law explicitly barring Medicare from negotiating lower prices with drug corporations.” In the past CBO had determined that the “extent of any savings would depend significantly on the details of legislative language; a proposal that applied to a broader range of drugs could generate no savings or even increase federal costs. The effect on federal spending would also depend on how the Secretary [of Health and Human Services] would choose to exercise any new authority to negotiate prices.”

This year, Congress has taken up legislation that alleges to allow for negotiation, but the plan is more akin to price-setting than an actual process of negotiation.  Drug prices would be pegged to foreign government price controls, through an international pricing index (IPI) that sets an upper limit on the price HHS could accept for a particular drug.[12] CBO also noted that there would be an impact on innovation with fewer drugs coming to market.[13] Any drugs newly launched on the market would likely have significantly higher prices as well.

There are a total of 68 Biden policy proposals for which there is not enough information currently available to determine a cost estimate. One of these, as noted above, could lead to savings for federal prisons. The rest have the potential to further boost the price tag of Biden’s agenda.

Biden advocates for several proposals which have been introduced in Congress as legislation that authorize new spending but do not specify a dollar amount. The text of these bills authorize “such sums as may be necessary,” including the Domestic Workers’ Bill of Rights Act (H.R. 3760 and S. 2112), the Protect Our Workers from Exploitation and Retaliation Act H.R. 5225 and S. 2929),  the Public Service Freedom to Negotiate Act (H.R. 3463 and S. 1970), and the Extreme Risk Protection Order Act of 2019 (S. 506). Additionally, the Jabara-Heyer NO HATE Act (S. 2043) would provide incentives for hate crime reporting and provide grants for state-run hate crime hotlines but does not include an authorization of appropriations.

The unknown items with the largest potential impact on federal spending include:

Recent polling indicates that many voters perceive Biden as a “moderate” candidate. He was elected to the Senate in 1972 and was reelected six times before he was selected to run as Vice President with then-Senator Barack Obama in 2009. Beginning in 1991 during the 102nd Congress, NTUF’s former BillTally cost accounting project tracked the net cost of legislation sponsored and cosponsored by each member of Congress. The data available for Biden from the 102nd through the 110th Congress shows that the cost of his legislative agenda was less than half of what the average Democratic Senator proposed during the same time.

However, in comparison to the leading candidates in the 2016 Democratic Primary contest, the $1.3 trillion cost of his presidential campaign proposals is six times that of Hillary Clinton’s $221 billion agenda[15] ($242 billion in inflation-adjusted dollars), and much closer to Bernie Sanders’ $1.7 trillion agenda during his 2016 presidential run[16] ($1.914 trillion in inflation-adjusted dollars). 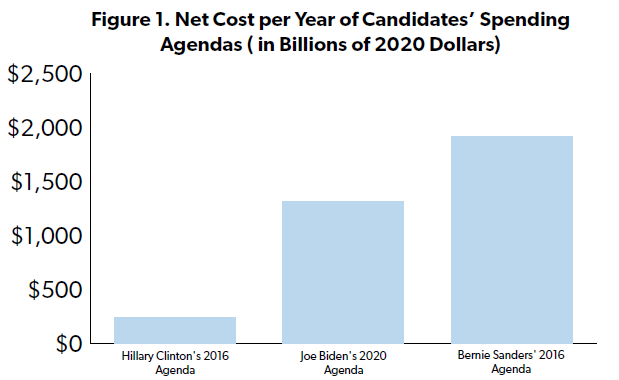 The $1.3 trillion Biden spending agenda comes at a time of record levels of deficit and debt. Moreover, according to the Tax Foundation's analysis, his proposed tax hikes fall short of paying for the additional spending.[17] They estimate that his tax proposals would collect $2.65 trillion over the next decade when accounting for macroeconomic feedback and would reduce GDP by 1.47 percent over the long term. In other words, Biden’s proposed tax hikes are only sufficient to cover some 20 percent of his spending agenda. He has also pledged not to raise taxes on people earning less than $400,000. But piling on additional federal debt will have significant impacts on all future taxpayers' wallets through a less productive economy, lower income, higher costs to finance debt.

Joe Biden has proposed a wide range of changes to federal spending in a sprawling list of policy commitments. This comprehensive analysis helps to shed light on the bottom line impact those proposals would have on the federal budget.

[6] Joe Biden. (2019). “The Biden Plan to Build Security and Prosperity in Partnership with the People of Central America.” Retrieved from https://joebiden.com/centralamerica/.

[13] Congressional Budget Office. (2019). “Letter to the Honorable Frank Pallone Jr. Re: Effects of Drug Price Negotiation Stemming from Title 1 of H.R. 3, the Lower Drug Costs Now Act of 2019, on Spending and Revenues Related to Part D of Medicare.” Retrieved from https://www.cbo.gov/system/files/2019-10/hr3ltr.pdf.

[14] Additional information is available at ntu.org/biden-agenda.

[16] Brady, Demian. “The Net Cost of Clinton's & Sanders' Campaign Proposals Featured in the Debates to Date.” National Taxpayers Union Foundation. February 19, 2016. Retrieved from https://www.ntu.org/foundation/detail/the-net-cost-of-clintons-sanders-campaign-proposals-featured-in-the-debates-to-date. The cost estimate listed on the page for Hillary Clinton’s agenda was as of February 19, 2016 and did not encompass her entire agenda as she offered additional proposals through the course of the campaign.