It is well known that under various laws, Representatives and Senators are eligible for lavish perks, such as a generous pension program. However, taxpayers might be unaware of tax-free “death gratuity” payments made to the heirs of members who pass away while serving in office. The amount is equal to their annual salary, which is $174,000 for rank-and-file members but more for those in leadership positions. The benefit is not a matter of law but has been provided as a tradition dating back well over a century.

Since 2000, Congress has bestowed 32 death gratuity payments costing taxpayers $5 million in total.[1] Among the recipients were heirs of late members with net worth estimated in millions of dollars. This raises questions about the necessity of this outlay, especially given the record level of deficits. Previously, some members of Congress have introduced bipartisan legislation to prohibit future payments, but these efforts have stalled and have yet to pass at the committee level. Representative Bill Posey (R-FL) has introduced a bill to end the practice in the new Congress.

In 1946, Congress passed a law that provided retirement benefits for Representatives and Senators. Since at least several decades before that, Congress has had a tradition of providing a death gratuity payment to the heirs of members of Congress who die while serving in office. The practice dates back to an era when many widows of the late members had limited sources of income so the payment served as a form of life insurance.

NTUF was able to identify gratuity payments as far back as 1880, when the Clerk of the House was authorized to pay $6,000 to the widow of the late Representative Alfred Lay.[2] A more extensive search of congressional records may unearth payments made even earlier.

In the modern era, the amount is equal to a year's salary for the member. In 2021, rank-and-file members are paid $174,000; the majority leaders, minority leaders, and the Senate President Pro Tempore get $193,400; and the Speaker of the House receives $223,500.[3] The gratuity payments are usually attached to legislative branch appropriations bills and are provided as a gift to the recipient so that it is not considered as taxable income.

By searching in the Congressional Record, NTUF identified the payments made to the heirs of each of the Members of Congress who passed away while in office since 2000. Most received the annual salary of a rank-and-file member. The payments to the heirs of Senators Robert Byrd and Daniel Inouye were higher because they both served as the Senate President Pro Tempore at the time of their passing. 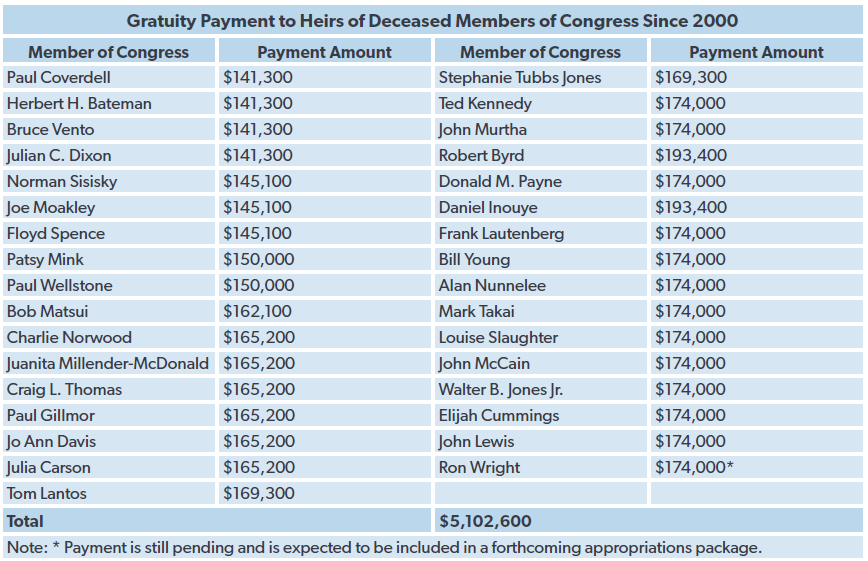 In total, Congress has spent more than $5.1 million in taxpayer dollars on death gratuities over the last two decades or so. These payments have been made without regard to the financial status of the families of the late members. Not all the members were wealthy, but payments were granted to the families of several Representatives or Senators with net worths estimated in the millions, including:

Reform Legislation Would End the Payments

This year, Representative Posey has authored legislation, H.R. 412, that would stop gratuity payments to heirs.[10] This would not impact any other benefits that heirs may be eligible for under federal law, but would prohibit special supplemental payments to widows at taxpayer expense. Posey has introduced versions of the bill in the past several Congresses.

In a press release from a previous introduction, Posey comments that providing the payment is “difficult to justify particularly when every other American purchases their own life insurance. … Members should purchase their own life insurance. This issue concerns the proper use of taxpayer resources along with restoring the legislative branch to a position of trust in the public eye.”[11]

The death gratuity tradition is outmoded in the modern era given the availability of options for retirement savings and life insurance. Employment benefits for Congress are already lavish in comparison to the private sector, including expensive defined-benefit pension plans that can be drawn even in the event of a felony criminal conviction, in some cases.

Ending the death gratuity would make only a very small contribution to the spending restraint needed to put America’s fiscal house in order, but that’s all the more reason that Congress should consider taking action to stop the process. Members of Congress generally come from wealthy backgrounds and don’t need additional handouts from taxpayers on top of the generous benefits they already receive. Given the massive debt obligations run up by Congress, taking this step is the least they can do to contribute to future fiscal stability.

[1] One additional payment is currently pending.

[2] The Statutes at Large of the United States of America from April 1879 to March 1881, and Recent Treaties Postal Conventions, and Executive Proclamations. 1881. Retrieved from https://www.loc.gov/law/help/statutes-at-large/46th-congress/c46.pdf.

[4] Posner, Gerald. “Who Gets Teddy’s Millions?”, The Daily Beast, Aug. 27, 2009. Retrieved from https://www.thedailybeast.com/who-gets-teddys-millions.

[5] The Christian Science Monitor. (2012). “Who Are the 10 Richest Members of Congress?” Retrieved from https://www.csmonitor.com/Business/2012/1025/Who-are-the-10-richest-members-of-Congress/Sen.-Frank-Lautenberg-D-N.J.

[6] Hoffower, Hillary. “A Look at the Life and Fortune of John McCain, Who Has a Sprawling Real Estate Portfolio and Donated $1.7 Million in Book Sales to Charity.” Business Insider. August 25, 2019. Retrieved from https://www.businessinsider.com/john-mccain-net-worth-real-estate-charity-2018-5.

Knueven, Liz. “The Net Worth in America by Age, Race, Education, and Location.” Business Insider. August 13, 2020. Retrieved from https://www.businessinsider.com/personal-finance/average-american-net-worth.

[10] Representative Bill Posey. “H.R. 412: To prohibit the payment of death gratuities to the surviving heirs of deceased Members of Congress.” January 21, 2021. Retrieved from https://www.congress.gov/bill/117th-congress/house-bill/412.