March 23, 2020 marks the two year anniversary of import taxes on steel and aluminum.[1] Like most of the Trump administration’s trade actions, the new taxes were imposed with no congressional approval. The White House’s tariffs represent, in percentage terms, the largest federal import tax increase since 1920. (See Appendix 1 for annual U.S. customs revenue data.)

President Trump has pursued a smorgasbord of protectionist executive actions including costly “Buy American” regulations, disruptive information and communication technology supply chain rules, and proposed new taxes on imported cars and parts. Now his administration is reportedly contemplating new limits on imports of pharmaceuticals and medical devices.[2] The cumulative impact of these actions on Americans is significant. 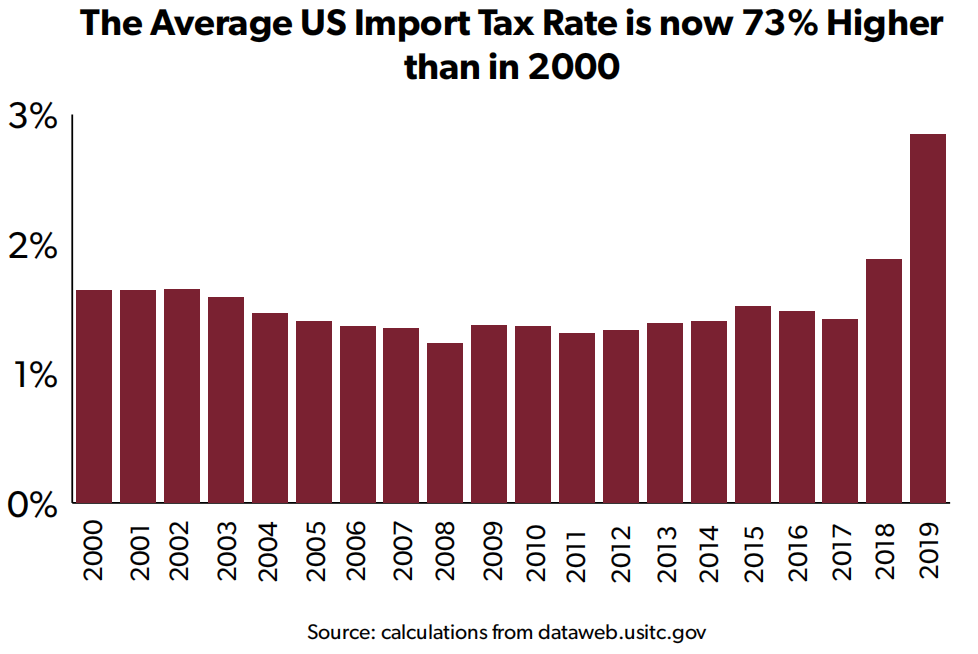 In terms of the average tariff rate Americans face, the Trump administration has reversed a trend toward lower U.S. and global tariffs that began after World War II. 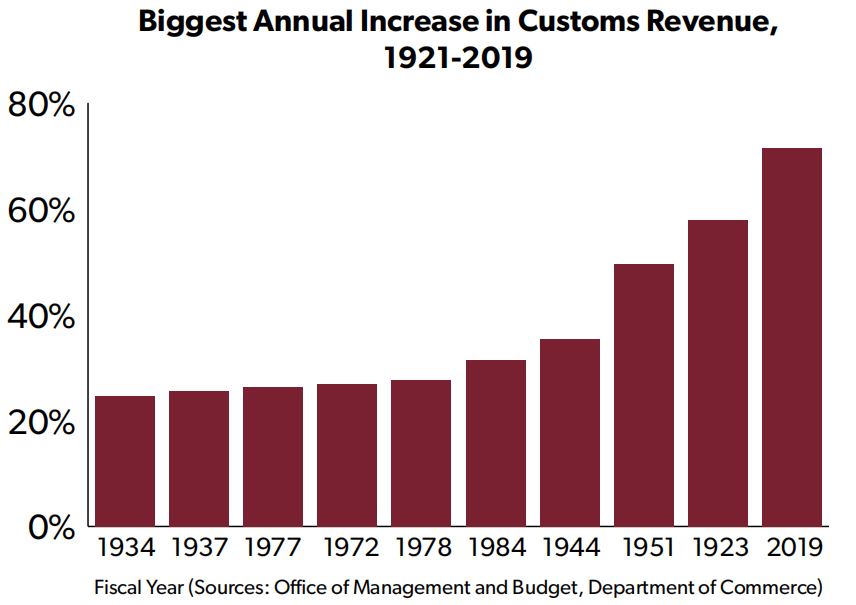 While revenue cost to households is a useful measure, it does not represent the net economic impact of tariffs. President Trump has said that billions of dollars “are pouring into the coffers of the U.S.A. because of the Tariffs being charged to China.”[5] Although the tariffs are being charged to Americans, not China, it is true that the tariffs provide revenue to finance government spending, and any benefits associated with that should be accounted for.

On the other hand, the revenue cost understates the impact of tariffs because it does not include their indirect economic burden. A summary of current research on the topic found estimates of the net economic cost to U.S. households in 2020 ranges from $500 to $1700.[6] 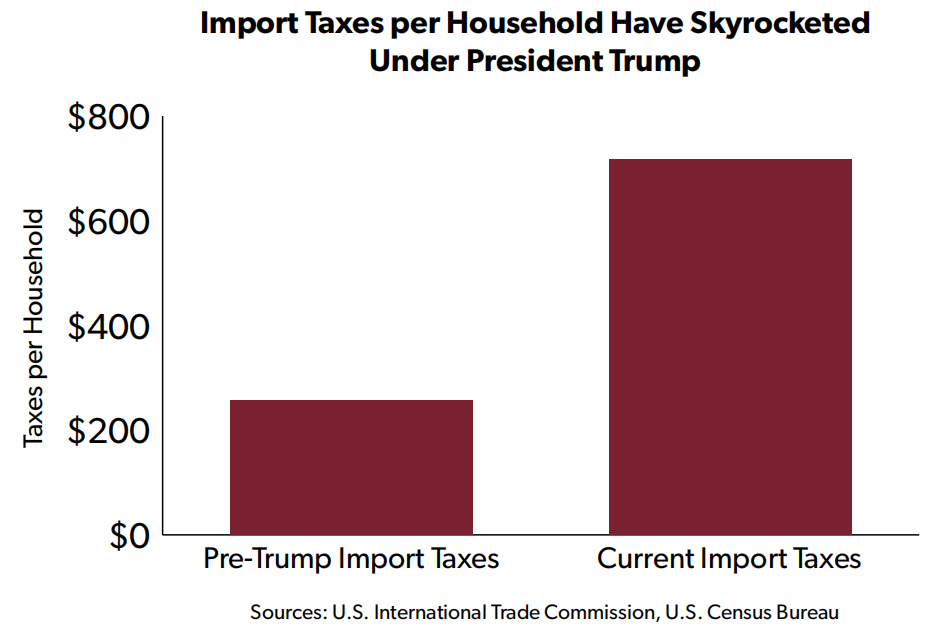 The Trump administration’s taxes on imported steel and aluminum took effect March 23, 2018. The new taxes were imposed under Section 232 of the Trade Expansion Act of 1962. Sec. 232 is a cold war-era measure that allows the president to restrict imports for national security reasons.

Navarro and Sec. Ross turned out to be wildly mistaken. According to Christine McDaniel of the Mercatus Center, the Commerce Department has received more than 107,000 requests to have imported products excluded from steel or aluminum tariffs.[10] The sheer number of requests indicates that American businesses do, in fact, think the restrictions are a “big deal.”

Moreover, the exclusion process appears to be highly flawed. Last year, the Commerce Department’s Office of Inspector General issued an alert “regarding a lack of transparency that contributes to the appearance of improper influence in decision-making for tariff exclusion requests under Section 232.”[11]

As more evidence that steel and aluminum tariffs are wreaking havoc on downstream American industries, on January 24 President Trump issued a proclamation “Adjusting Imports of Derivative Aluminum Articles and Derivative Steel Articles Into the United States.”[12] His proclamation would allow for the imposition of additional taxes on imported products containing steel or aluminum. If steel and aluminum tariffs were not affecting downstream industries, there would be no reason to issue a new proclamation authorizing new tariffs on imports made with steel or aluminum.

There is a persistent theme being pushed in some quarters that the Trump administration is pursuing a trade strategy designed to decouple the U.S. economy from China. However, the administration’s policy has not had the effect that this rhetoric might suggest. For example, they initiated a dispute under Section 301 of the Trade Act of 1974 explicitly designed to make China a better place to do business.

In the wake of the COVID-19 coronavirus global health pandemic originating in Wuhan, China, outside calls to decouple have only strengthened. And in fact, there may be good reason for American businesses to think carefully about how to structure their supply chains as a result.

But historically, unilateral trade threats like the administration’s Sec. 301 dispute with China have often either failed to achieve their goals or ignited a retaliatory back-and-forth trade war. That’s why the United States led efforts to create an international dispute resolution system in the World Trade Organization designed to hold countries accountable to global trade rules.

One of the main results of the current U.S. Sec. 301 dispute—in addition to costing Americans billions of dollars in taxes—has been to empower China’s communist leaders. According to Mary Lovely and Chad Bown of the Peterson Institute for International Economics, “The phase one accord committing China to buy additional US goods seems certain to strengthen Chinese state-owned enterprises (SOEs) and state control of the economy—the very policies the administration’s trade war supposedly sought to combat.”[15]

So far, Sec. 301 taxes have cost Americans who import goods from China $48.3 billion.[16] Even after the administration’s phase one trade deal with China, billions of dollars in U.S. taxes on Chinese imports remain in place. The Peterson Institute’s Bown has further documented how Sec. 301 tariffs have weakened the U.S. response to COVID-19: “The administration’s tariffs on Chinese medical products may contribute to shortages and higher costs of vital equipment at a time of nationwide health crisis.”[17]

These results were entirely predictable. In 2018, NTU released a letter from more than 1,100 economists, including 15 Nobel laureates, stating: “We are convinced that increased protective duties would be a mistake. They would operate, in general, to increase the prices which domestic consumers would have to pay. A higher level of protection would raise the cost of living and injure the great majority of our citizens.”[18] This is exactly what happened in the United States as a result of the executive branch’s tax increases.

What to do next

After two years and billions of dollars in costs to American businesses and individuals, the trade war has done little beyond weakening America’s economy. In the face of an economic shutdown from a global health crisis, these impacts will be felt more strongly than ever..

If President Trump wants to strengthen the economy, he could begin by reducing or eliminating taxes imposed under Sec. 232 and Sec. 301. These cuts could be implemented immediately, with no need to wait for congressional action. In the event President Trump decides not to act, Reps. Stephanie Murphy (D-FL) and Joe Cunningham (D-SC) recently urged Congress to suspend all of President Trump’s tariffs.[19] Dozens of businesses and trade associations have called on President Trump “to provide tariff relief as one of the measures to help those hurting financially from the economic effects resulting from the current public health crisis.”[20]

In addition, President Trump should reduce and, when possible, eliminate all tariffs on medically useful imports. Under Section 103(a) of the Bipartisan Congressional Trade Priorities and Accountability Act of 2015, whenever the President determines that existing U.S duties or other import restrictions are unduly burdening and restricting the foreign trade of the United States, the President may reduce duties by up to 50 percent. On products for which tariff rates that are currently 5 percent or lower, the President may eliminate tariffs.[21]

In 2019 the federal government collected $150 million in taxes on imported instruments and appliances used in medical, surgical, dental or veterinary sciences, and another $31 million in tariffs on surface-active washing and cleaning preparations.[22] Even as a symbolic move, eliminating these tariffs would demonstrate the Trump administration’s dedication to public health.

With the Declaration of Independence, our country’s founders initiated a rebellion against leaders who cut off our trade with all parts of the world.[23] Today, we must remain vigilant against efforts to impose costly tariffs on American families and businesses. 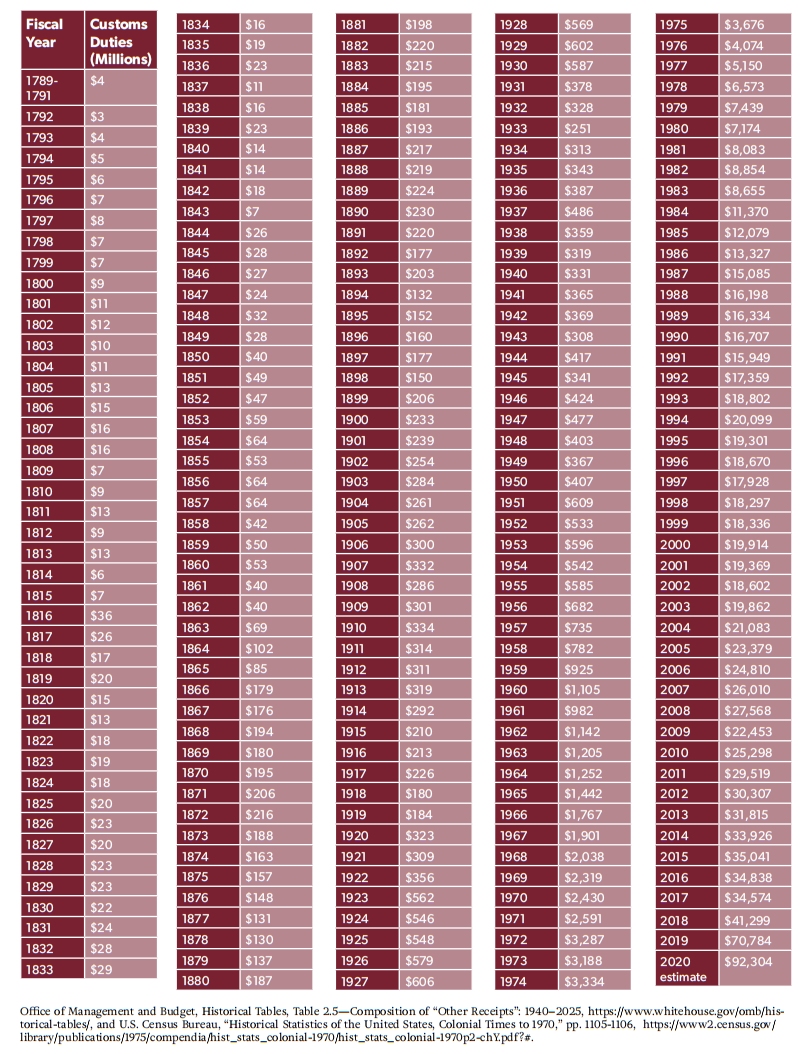 [12] Proclamation 9980 of January 24, 2020, “Adjusting Imports of Derivative Aluminum Articles and Derivative Steel Articles Into the United States”. Retrieved from: https://www.federalregister.gov/documents/2020/01/29/2020-01806/adjusting-imports-of-derivative-aluminum-articles-and-derivative-steel-articles-into-the-united