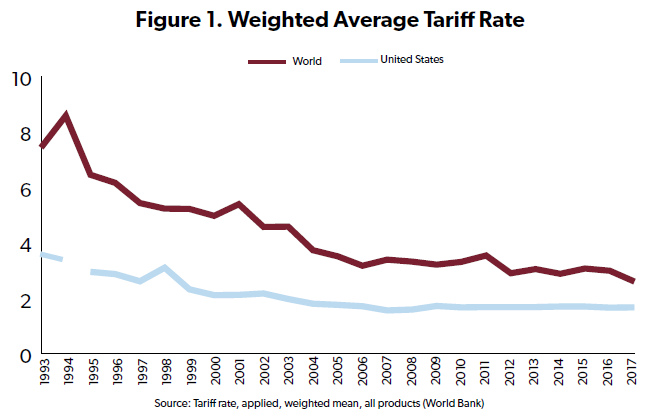 U.S. policies in recent decades achieved dramatic reductions in foreign taxes on U.S. exports. Since 1993, just before implementation of two historic trade agreements -- the North American Free Trade Agreement (NAFTA) and the Uruguay Round agreement, which created the World Trade Organization (WTO) -- the average world tariff has fallen from 7.4 percent to 2.6 percent, a 4.8 percentage-point reduction. In comparison, the average U.S. tariff rate has declined from 3.8 percent to 1.6 percent.

While average U.S. tariffs remain lower than the world average, the long-term trend before President Trump’s election was toward tariff reciprocity at very low levels.

In recent years, Americans have repeatedly been told that the United States has gotten taken advantage of in trade negotiations. By the most straightforward measure, tariff rates, this is inaccurate.

Caroline Freund at the Peterson Institute for International Economics observed, “Trump is right that trade agreements have been one-sided—but he is wrong about the direction. Recent U.S. trade deals, both multilateral and bilateral, have involved much bigger tariff cuts by U.S trading partners than by the United States.”[2]

The United States has negotiated free trade agreements (FTAs) with 21 countries. In all but three of these, foreign tariffs were reduced further than U.S. tariffs. 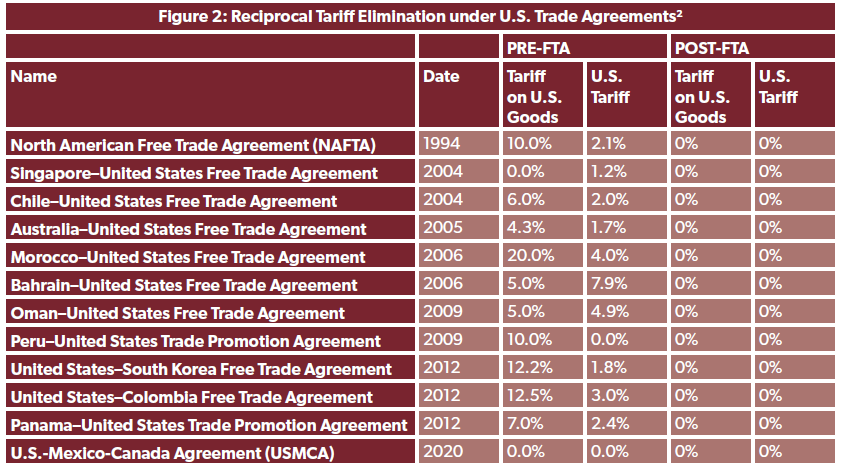 The U.S.-Central America-Dominican Republic FTA (CAFTA-DR) reduced foreign tariffs more than U.S. tariffs. Prior to the FTA, the Peterson Institute for International Economics reported: “The U.S. nominal average tariff is much lower than that of any Central American country.”[4] According to the Congressional Research Service, “most U.S. imports from the region had already been duty free.”[5]

Trade agreements with Israel, Canada, and Jordan  were not included because bilateral average tariff statistics were unavailable. However, in each case It is likely that FTAs reduced foreign tariffs on U.S. exports more than vice-versa.

While it is straightforward to suggest that bigger tariff reductions by our trading partners show that the United States was not taken advantage of, nearly any economist will tell you that U.S. tariff cuts benefit Americans at least as much as foreign tariff cuts. U.S. tariff reductions allow resources to flow to our most competitive industries, give farmers and manufacturers access to the most affordable inputs from across the globe, and indirectly boost U.S. exports.

Also, while every trade agreement is listed as lowering tariff rates to zero, there are almost always special-interest exceptions for politically powerful sectors, so the actual post-FTA tariff is not quite zero. For the vast majority of goods, though, FTAs successfully eliminated nearly all tariffs. 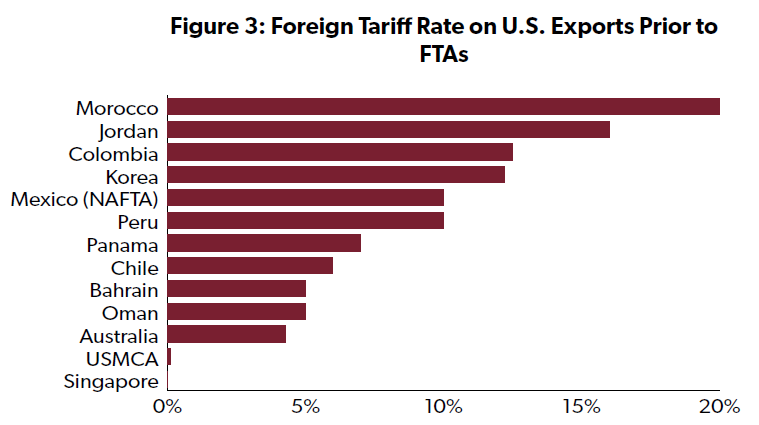 For example, with respect to the U.S.-Singapore FTA, the International Trade Commission (ITC) noted that because the United States had relatively low tariffs, and Singapore had virtually no tariffs, “The FTA’s most important benefits are not related to the reciprocal tariff elimination as much as the agreement’s non-tariff provisions.”[8]

More recently, the USMCA trade deal failed to secure any significant tariff cuts, because, as the ITC observed: “NAFTA has already eliminated duties on most qualifying goods and significantly reduced nontariff measures.”[9] However, USMCA included several significant nontariff provisions. Some of these were beneficial, like rules to encourage digital trade.[10] Others were misguided, like minimum wage mandates and changes to “rules of origin” for automobile production. These provisions for automobile manufacturing will make it more costly to build motor vehicles in North American and increase car prices in the United States.[11] Unlike other U.S. trade agreements, which reduced tariffs, the Congressional Budget Office (CBO) found that USMCA would increase automobile tariff collections by $3 billion over 10 years.[12]

Lessons for the Future

Successful U.S. trade negotiations, combined with foreign countries’ increasing use of unilateral tariff cuts to promote economic growth and prosperity, have significantly reduced foreign barriers to U.S. exports.[13] That trend was interrupted when the Trump administration embarked on a series of unilateral tariff increases that prompted foreign retaliation against U.S.-made exports.

The United States should quit hiking tariffs and starting trade wars. Instead, we should lead by example and eliminate self-destructive trade barriers at home. With respect to trade agreements, the United States should make negotiation of trade deals that lead to zero tariffs, zero nontariff barriers, and zero subsidies its top priority because we know from history that free trade agreements work for America.

[3] Data from the Office of the U.S. Trade Representative, the U.S. International Trade Commission, the U.S. Chamber of Commerce, the Peterson Institute for International Economics, and the World Bank.