President-elect Joe Biden has released his “Build Back Better” plan to bolster American industrial strength. According to his plan, “Biden does not accept the defeatist view that the forces of automation and globalization render us helpless to retain well-paid union jobs and create more of them here in America. He does not buy for one second that the vitality of U.S. manufacturing is a thing of the past.”[1]

While this is a good start, President-elect Biden could even go a step further. Technological innovation and expanded international trade and investment are actually the key to creating more good manufacturing jobs in the United States -- both for manufacturing workers who belong to unions and also for the 91.4 percent who are union-free.[2]

Here are three surprising facts the Biden administration should know about the importance of international trade and investment for American manufacturing manufacturing workers:

1. In 9 of the last 10 years, U.S. manufacturing employment increased.

2. International investment is responsible for the bulk of new manufacturing jobs.

3. Manufacturing employment and output have increased over the last decade, even as the U.S. trade deficit has increased. The trade deficit reveals very little about the strength of the American manufacturing sector and the economy overall.

American manufacturing has not been wiped out by international trade. In fact, from 2010 to 2019, just before the global pandemic, the American economy was consistently generating new manufacturing jobs. 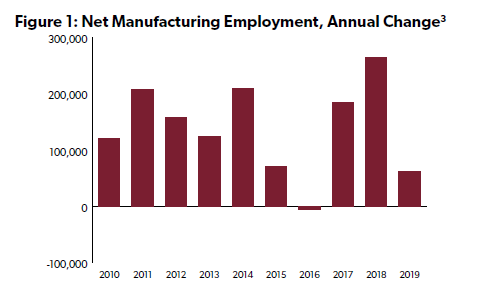 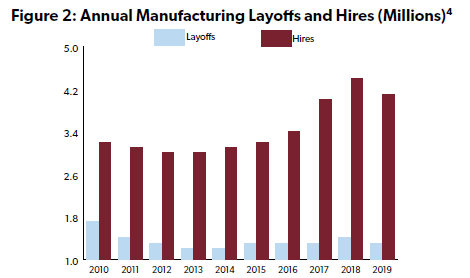 Foreign direct investment in U.S. factories generated a net increase of 812,700 manufacturing jobs from 2010 to 2018, the most recent year for which employment statistics are available.[5] This represents 70 percent of total U.S. manufacturing job growth for that timeframe.

Anti-trade proselytizers point to federal Trade Adjustment Assistance statistics documenting manufacturing job losses that result from import competition or jobs being relocated abroad.[7] From 2010 to 2018, imports and outsourcing led to the loss of 723,187 manufacturing jobs.

What they inevitably fail to report is that even more jobs were created by foreign direct investment in the U.S. economy, also known as insourcing. As the American Enterprise Institute’s Mark Perry observed:

“In the recent Trump-era discussions on US manufacturing, the outsourcing of production and jobs overseas, and the supposed ‘theft’ of our jobs by Mexico, China, and Japan, we lose sight of another big part of the global economy: the insourcing of millions of jobs into America by the 7,000+ US-based affiliates of foreign multinational companies that operate here and employ millions of our workers.”[8]

The obvious lesson is that the Biden administration should refrain from pursuing policies that interrupt job-creating investment flows.

3. The trade deficit reveals very little about the strength of American manufacturing.

One of the most persistent and inaccurate statements in all of international trade policy is that trade deficits destroy jobs.

This position is ludicrous, whether it comes from President Trump tweeting that “The United States has been losing, for many years, 600 to 800 Billion Dollars a year on Trade,” or from the Economic Policy Institute (EPI) alleging that “each $1 billion in imports from another country leads to job loss—by eliminating existing jobs and preventing new job creation—as imports displace goods that otherwise would have been made in the United States by domestic workers.”

If these statements were accurate, the government could create millions of new manufacturing jobs by ordering Navy submarines to torpedo incoming cargo ships before they reach American soil. 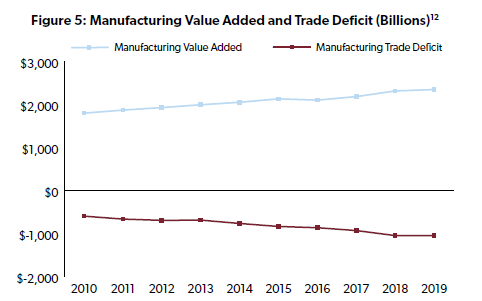 What the Biden administration should do

The “financial surplus” that offsets the trade deficit provides a valuable contribution to the U.S. economy. For example, one-quarter of U.S. stocks are owned by foreign investors. Lawmakers must remain vigilant in assessing any national security implications of such investments, but economic history shows us that these dollars provide much-needed capital for American companies to innovate, and they boost the value of Americans’ retirement portfolios. But for Peter Navarro, Director of Trade and Manufacturing Policy for President Trump, foreign investment represents “conquest by purchase.”[14]

To President Trump’s Department of Commerce, cars made in the United States by foreign-owned companies are not an illustration of American manufacturing prowess. Instead, they are an alleged national security threat to the United States.[15]

While criticizing job-creating foreign investment, the Trump administration also nearly doubled the average tariff applied to imports, and even imposed new tariffs on steel, aluminum, and other inputs that American manufacturers rely on to compete in the global economy.

In the U.S.-Mexico-Canada Agreement, the Trump administration also increased North American content rules for automobile manufacturing and imposed an unprecedented minimum wage requirement for autoworkers. In 1983, President Ronald Reagan described similar domestic content requirements as a “cruel hoax” that would make it more expensive to build cars in the United States.[16]

The Trump administration’s approach to international trade and investment was nothing less than a massive increase in taxes and regulations, accompanied by an unhealthy dose of hostile rhetoric. The Biden administration should repudiate these destructive policies.

[1] Biden for President. “The Biden Plan to Ensure the Future is Made in ‘All of America’ by all of America’s Workers.” Retrieved from https://joebiden.com/made-in-america/ (Accessed November 25, 2020).

[7] See Public Citizen, “Since 2017, Hundreds of Thousands of American Jobs Were Offshored, Trade Deficit Is Up 22%,” September 28, 2020. Retrieved from https://www.citizen.org/news/since-2017-hundreds-of-thousands-of-american-jobs-were-offshored-trade-deficit-is-up-18/.

[8] Perry, Mark J. “We hear about US jobs outsourced overseas (‘stolen’) but what about the 7.8M insourced jobs we ‘steal’ from abroad?” American Enterprise Institute, November 18, 2019. Retrieved from https://www.aei.org/carpe-diem/we-hear-about-us-jobs-outsourced-overseas-stolen-but-what-about-the-7-4m-insourced-jobs-we-steal-from-abroad-2/.

[15] President Donald Trump. “Proclamation Adjusting Imports of Automobiles and Automobile Parts Into the United States.” May 17, 2019. Retrieved from https://www.whitehouse.gov/presidential-actions/adjusting-imports-automobiles-automobile-parts-united-states/.