In the State of the Union Address, it will come as no surprise if President Trump calls for approval of the United States Reciprocal Trade Act. Many analysts have commented on problems with the act. Here are some additional things to know about why it’s the wrong policy for America.

Since World War II, treating our trading partners as allies rather than adversaries has paid enormous dividends for Americans. Just since 1990, world tariffs fell by nearly two-thirds as U.S. exports more than doubled, even after adjusting for inflation. 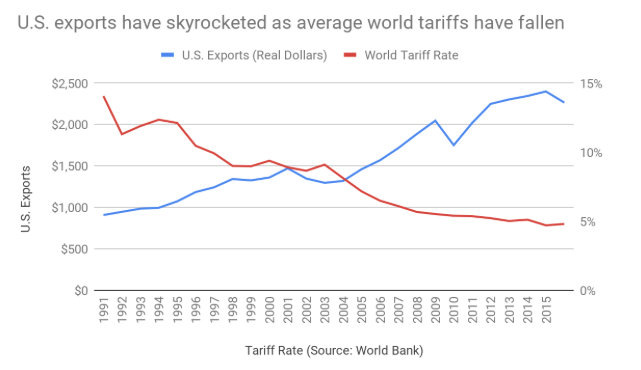 The Reciprocal Trade Act would turn this successful approach to trade on its head.

What is reciprocity and why does President Trump think we need it?

Reciprocity can mean many different things. In a 2018 tweet, President Trump defined it this way:

When a country Taxes our products coming in at, say, 50%, and we Tax the same product coming into our country at ZERO, not fair or smart. We will soon be starting RECIPROCAL TAXES so that we will charge the same thing as they charge us. $800 Billion Trade Deficit-have no choice!

The handful of proponents who endorse this approach often argue that tariff reciprocity is needed to as a lever to reduce foreign trade barriers. But the White House’s own case studies show this is untrue. For example, the White House produced a chart with tariffs on selected cherry-picked products from Japan, China, Thailand, Turkey, and the European Union attempting to show “unfair” examples of non-reciprocal tariffs.

But each of those trading partners has lowered its average tariff on U.S. exports significantly, without the need for blunt instruments like the Reciprocal Tariff Act. President Trump wants to replace a successful post-World War II policy based on the understanding that trade is win-win with one that is likely to encourage foreign governments to retaliate against Americans. 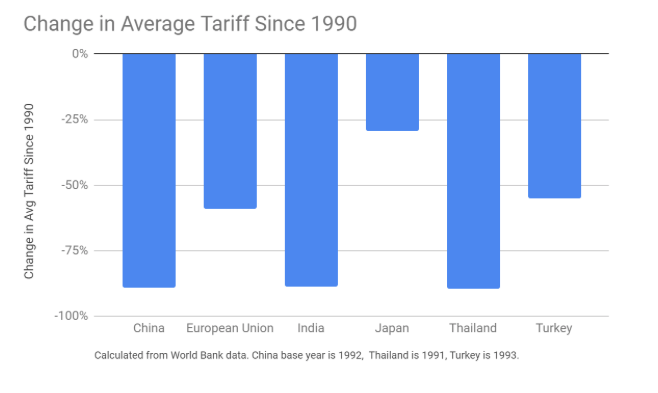 Rep. Matt Gaetz, R-FL, has contended: “Well, we've got to have an Old Testament approach to trade, an eye for an eye.” But this approach to tariff policy has been tried before, with results that were often disastrous. President Ronald Reagan described the risks involved in eye-for-an-eye tariff reciprocity:

I think you all know the inherent danger here. A foreign government raises an unfair barrier; the United States Government is forced to respond. Then the foreign government retaliates; then we respond, and so on. The pattern is exactly the one you see in those pie fights in the old Hollywood comedies: Everything and everybody just gets messier and messier. The difference here is that it's not funny. It's tragic.

History shows shows trade policy is more likely to succeed if it is based on the Golden Rule instead of on hostile eye-for-an eye reciprocity. It turns out that the United States benefits when we treat our trading partners the way we would like them to treat us.

We should adopt this approach to trade policy not out of altruism, but because it is a superior way of encouraging other countries to treat us favorably.

This is similar to anthropology’s concept of “generalized reciprocity,” where a person does a favor for someone else without expecting any immediate compensation, but with the knowledge that they may receive favorable treatment in return. An example would be buying lunch for a friend with the understanding that the friend might pay for lunch the next time.

In contrast to eye-for-an-eye reciprocity, sequential reciprocity has led to years of increasing prosperity and export growth.

U.S. trade agreements are based on a mutually beneficial form of reciprocity with both countries reducing most trade barriers to zero. In almost every free trade agreement the United States has signed, foreign barriers have fallen by more than U.S. barriers. For example, prior to the North American Free Trade Agreement (NAFTA), Mexico’s average tariff on U.S. exports was about 10 percent while the average U.S. tariff on imports from Mexico was just 2 percent. Zero-tariff reciprocity remains a desirable goal for U.S. trade policy.

Another way to define reciprocity would be for each country to purchase the same amount of imports from its trading partners. Under this definition, the United States would need to boost imports significantly to achieve reciprocity with other countries. On average, other countries spend much more on imports by this measure. 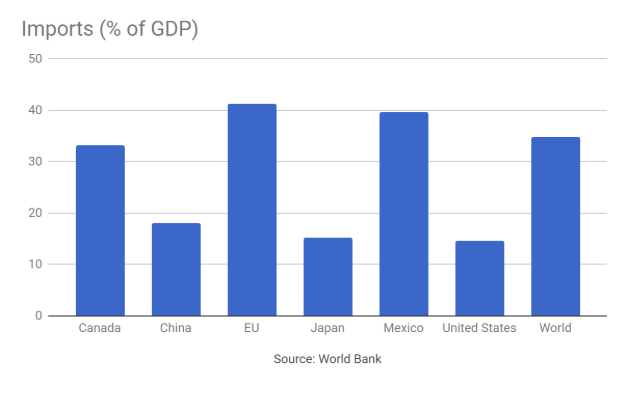 Attempting to mirror foreign tariffs is the opposite of an America First trade policy, because it would result in the U.S. government copying bad policies from other governments instead of pursuing policies that would benefit Americans. As economist J. Laurence Laughlin asked in 1903: “But, should we desire reciprocity? ... Certainly there is no reason why we should deprive ourselves of the immediate benefit of cheaper goods because we feel that we must wait until other countries are willing to get our goods as cheaply.”

Instead of mirroring bad trade policies from other countries, some legitimate America First trade policies the Trump administration could undertake include: