A new bill from Sens. Tammy Baldwin (D-WI) and Josh Hawley (R-MO) would direct the Federal Reserve Bank to devalue the dollar and tax foreign investment in an effort to eliminate the trade deficit.[1]The so-called “Competitive Dollar for Jobs and Prosperity Act” is flawed, as are similar proposals from Sen. Elizabeth Warren (D-MA) and White House Trade Advisor Peter Navarro to devalue the dollar.

Empowering the Fed to tax foreign investment is dangerous

Under Article I, Section 8 of the U.S. Constitution, Congress -- not the Fed -- has the power to impose taxes. Delegating its taxing authority to a body that is unaccountable to voters would be a serious subversion of the ordinary constitutional order. Additionally, it is far from clear that the Fed wants such power, given its traditional posture of staying out of most political and policy fights.

Furthermore, taxing new foreign investment would make it more expensive for the federal government to borrow money, drive down the U.S. stock market, and discourage foreign companies from opening new facilities in the United States.

Surprisingly, these are not simply undesirable side effects of the bill. Sens. Baldwin and Hawley understand that if you tax something -- in this case, foreign investment -- you get less of it, so the explicit goal of the bill is to make the United States a less desirable place to invest.

Devaluing the dollar would be an additional hidden tax

Their bill further directs the Federal Reserve to manipulate the value of the dollar in order to achieve “balance” in the U.S. current account. Devaluing the dollar would make exports cheaper and imports more expensive, theoretically reducing the trade deficit.

Just how much to devalue the dollar would be left to the Fed, but the Coalition for a Prosperous America (CPA), which has provided much of the support for the Competitive Dollar for Jobs and Prosperity Act, suggests it would take a 27 percent reduction in the value of the dollar to eliminate the current account deficit.[2]The current account includes international transactions in goods and services, income, and transfer payments. It is often used as shorthand for the trade deficit, which only includes transactions in goods and services.  The catch is that “devaluing the dollar” literally means making Americans poorer by reducing the purchasing power of their dollars. In this sense, devaluing the dollar would impose a hidden tax on Americans.

The strength of the dollar and economic growth

Sens. Baldwin and Hawley feel the dollar is too strong: “Foreign purchases of U.S. stocks, bonds and other assets have also led to an overvalued American dollar that has put our businesses and workers at a disadvantage. As a result, our trade deficit has exploded and 90,000 factories have closed down, thousands of family farms have gone bankrupt, and millions of manufacturing workers have lost their jobs.”

They aren’t the only ones peddling this story. For example, according to Sen. Elizabeth Warren’s “Plan for Economic Patriotism:”

“One of the most important factors in our trade deficit and our weak export levels is the value of our currency. Other countries have actively managed the value of their currency to boost exports and develop their domestic industries. And foreign investors and central banks have driven up the value of our currency for their own benefit. We should consider a number of tools and work with other countries harmed by currency misalignment to produce a currency value that’s better for our workers and our industries.”[3]

However, the evidence that a strong dollar is bad for the economy is relatively weak. For example, recent years have seen been both an appreciation in the value of the dollar and a stronger U.S. economy. Rebounding from the Great Recession in 2009, real U.S. manufacturing output has increased by 16.4 percent. U.S. agricultural output is up. Exports of manufacturing and agriculture goods are way up, too. 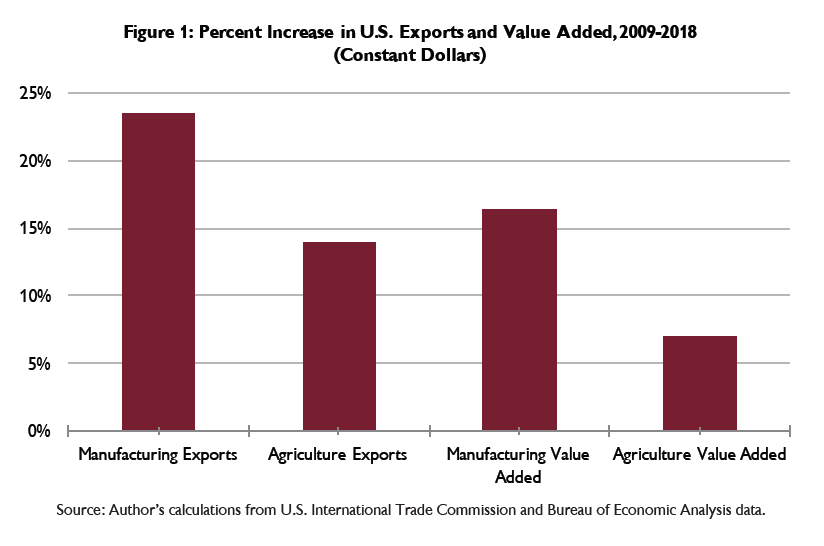 These improvements have accompanied increases in the value of the U.S. dollar of 14.6 percent since 2009. Over that same period, the U.S. unemployment rate declined from 9.3 percent to just 3.7 percent, the lowest rate since 1969, as the U.S. economy grew by 22.5 percent and added 17 million net new jobs.[5][6] 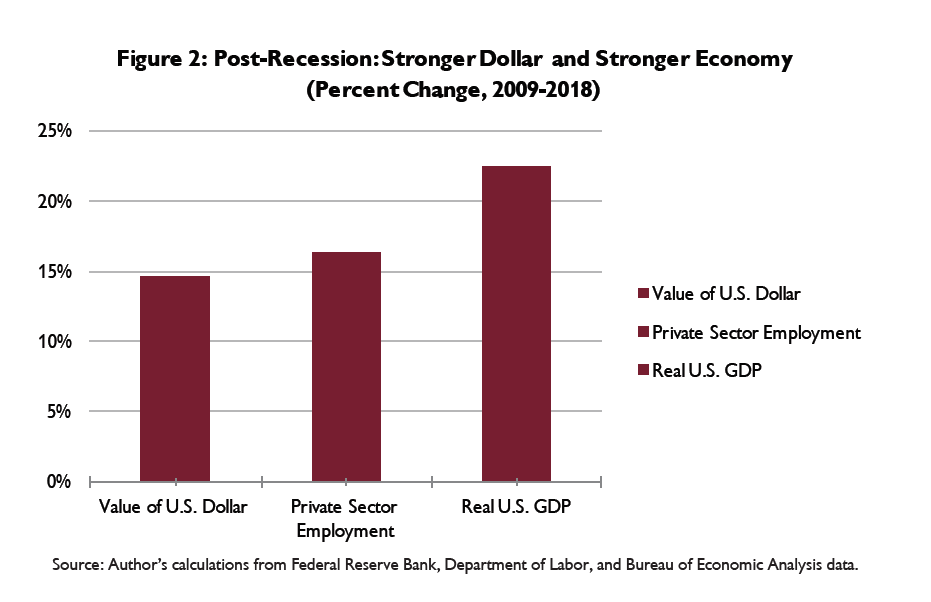 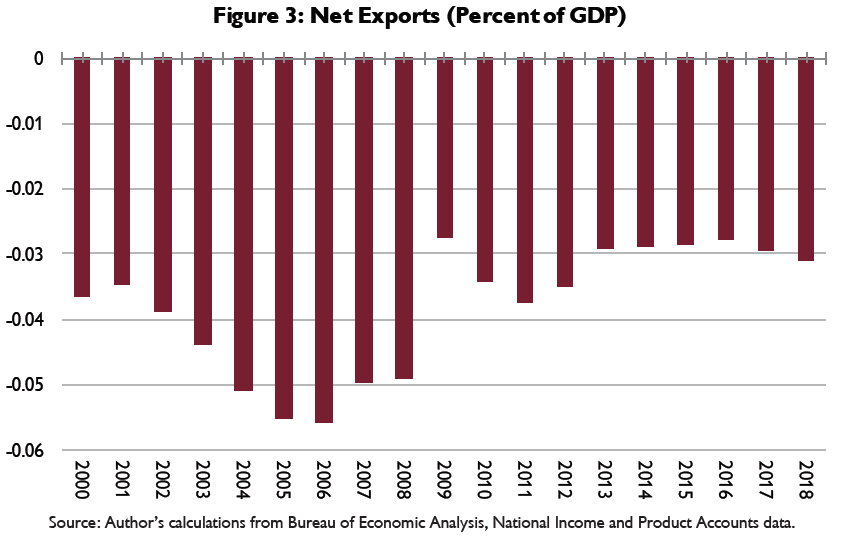 Critics argue that trade has been bad for the United States. According to the Coalition for a Prosperous America, “Output and employment have declined dramatically in the majority of tradable goods sectors, including manufacturing, mining, and agriculture.”

That is wrong. Output in each of these sectors of the economy has not only notdeclined, it has increased. 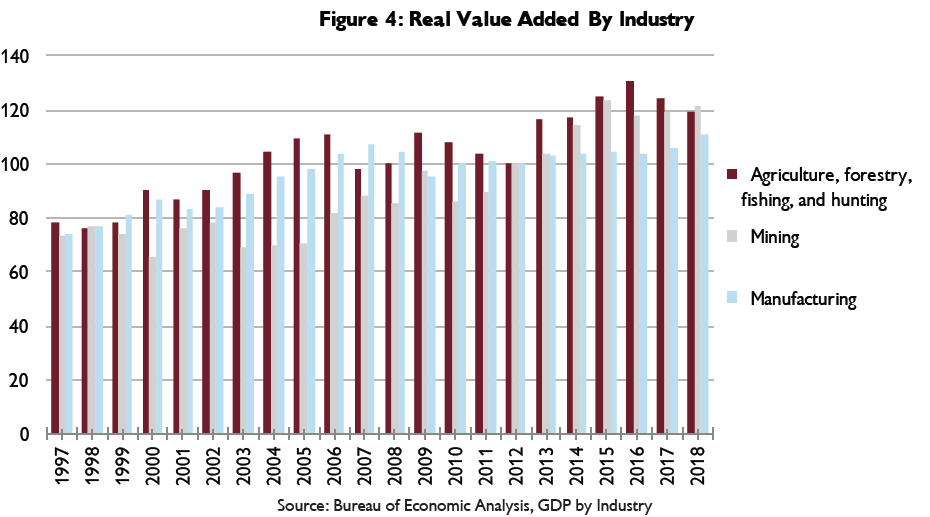 The goal of the Competitive Dollar for Jobs and Prosperity Act is to “achieve and maintain a current account balance,” but there is no justification for doing so. The goal should be to remove barriers to job-creating trade and investment, not to micromanage international transactions from Washington, DC.

The best-kept secret in Washington

The flipside of a current account deficit is an investment surplus. When all international transactions are accounted for, there is no overall deficit because trade and investment flows necessarily balance. As such, any deficit in the current account is matched by a surplus in the so-called “capital account,” which refers generally to investments made in the U.S. Unfortunately, this accounting identity appears to be one of the best-kept secrets in the nation’s capital. 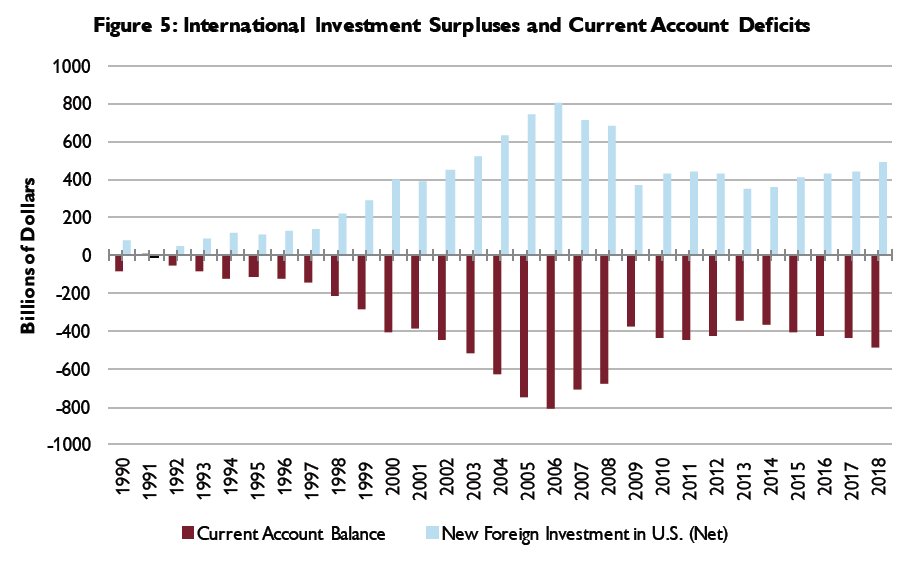 Foreign investment is a benefit, not a cost

The federal government should not manipulate Americans’ trade and investment activities based on a strategy of “exports good, investment bad.” Whether someone buys a U.S. export or invests in the U.S. economy, Americans benefit.

Historically, foreign capital has played an important role in U.S. economic growth. In the 1800s, foreign investment fueled the U.S. railway system, telephone industry, electric power services, steel production, and retailing. According to a comprehensive overview of foreign investment during early U.S. history, “foreign capital provided Americans with basic infrastructure investments, opened new opportunities for domestic and foreign capital in many other sectors, and had both an immediate and a catalytic role in promoting American economic development.”[9] 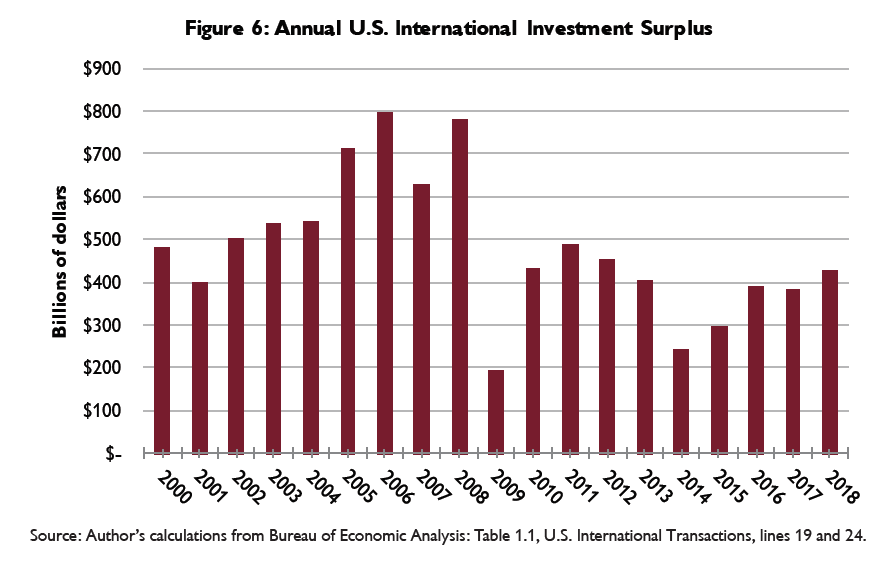 Reality is more complicated. Most U.S. imports are used to produce other goods. Only 37 percent of imports are consumer goods. The rest of our imports consist of raw materials, intermediate goods, and capital equipment used by U.S. farmers and manufacturers to compete in the global economy. Increasing the cost of imports like fuel and auto parts by devaluing the dollar would also increase their cost of doing business.

As the Cato Institute’s Dan Ikenson put it: “... with the proliferation of global supply chains and cross-border investment, the overwhelming majority of trade flows today are intermediate goods, so the effect of currency values on final prices cuts in different directions.”[10] 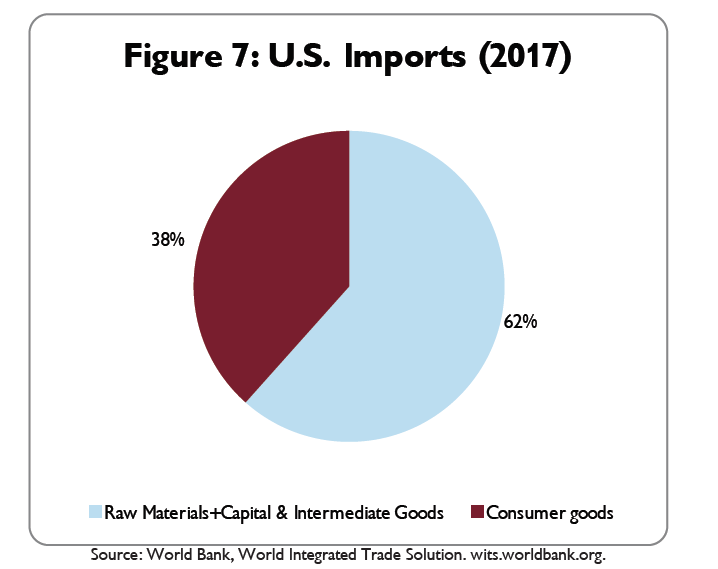 A 2010 International Monetary Fund (IMF) study calculated that every dollar decrease in the federal budget deficit would reduce the U.S. current account deficit by about 50 cents in the short-run and by 75 cents in the long-run.[11]If this is accurate, then eliminating the federal budget deficit would eliminate the current account deficit.

Their analysis is based on the relationship between federal borrowing and the trade deficit. The U.S. government is expected to borrow $893 billion in 2019 to finance federal overspending. Everything else being equal, this budget deficit tends to increase the trade deficit, as several experts have explained. Noted economists George P. Schultz and Martin Feldstein wrote, “If a country consumes more than it produces, it must import more than it exports. That’s not a rip-off; that’s arithmetic. Federal deficit spending, a massive and continuing act of dissaving, is the culprit. Control that spending and you will control trade deficits.”[12]

Trade expert Daniel Griswold said, “A related way to cut the trade deficit is for the government to borrow less. Reducing the government deficit (a form of “dissaving”) releases more funds for domestic investment, reducing the demand for foreign capital.”[13]

In other words, the most straightforward way to reduce the trade deficit is for the federal government to quit borrowing so much. However, for many politicians, it is easier to blame foreigners, “currency manipulation,” and “unfair trade deals” for the trade deficit than to confess that reckless federal deficit spending is partially to blame.

Fortunately, not everyone buys into the desirability of devaluing the dollar and reducing foreign investment. According to Larry Kudlow, Director of President Trump’s National Economic Council, “A great country needs a strong currency.”[14]President Trump himself touted the benefits of investing in the United States at a reception with Japanese executives: “I hope many of you in the room will also significantly increase your investments in the United States. There’s no better place to invest.”[15]

If Sens. Hawley, Baldwin, and Warren, and Peter Navarro get their way, that will no longer be the case. Taxing foreign investment and devaluing the dollar would have significant negative economic impacts and should be rejected outright.

[2]Ferry, Jeff, and Byers, Steven. “Imports Growth and Job Creation from a Competitive Dollar.” Coalition for a Prosperous America, February 2019.

[9]Wilkins, Mira. “Foreign Investment in the U. S. Economy before 1914.” The Annals of the American Academy of Political and Social Science, July 1991.

[15]Remarks by President Trump at a Reception with Japanese Business Leaders | Tokyo, Japan, The White House, May 25, 2019.