President Trump has wisely resisted calls to use the Defense Production Act to dictate how American businesses can operate, comparing such measures to those imposed by Venezuela. His comments echo those of U.S. Surgeon General Jerome Adams, who recently commented on the U.S. response to the coronavirus crisis: “We are not an authoritarian nation, so we have to be careful when we say, ‘Let's do what China did.’”

Unfortunately, a handful of politicians and key advisors to President Trump want to use this crisis to impose other measures that could make us more like China and Venezuela. In particular, it has been widely reported that the White House is contemplating draconian “Buy America” regulations that could increase costs for taxpayers and allow federal bureaucrats to dictate how private U.S. companies that produce pharmaceuticals and medical equipment are allowed to do business.

Peter Navarro, Director of the Office of Trade and Manufacturing Policy, has reportedly said the United States is “dependent on foreign sources” for crucial medicines and medical supplies. A Breitbart headline declared: “Josh Hawley introduces legislation to expose Chinese monopoly of U.S. drug, medical supplies.” According to Rep. Mike Gallagher (R-WI), “Our overreliance on products made in China doesn’t just threaten our medical supply chains. It threatens public health.”

The truth is more complicated.

In general, the United States is not reliant on China for medical supplies 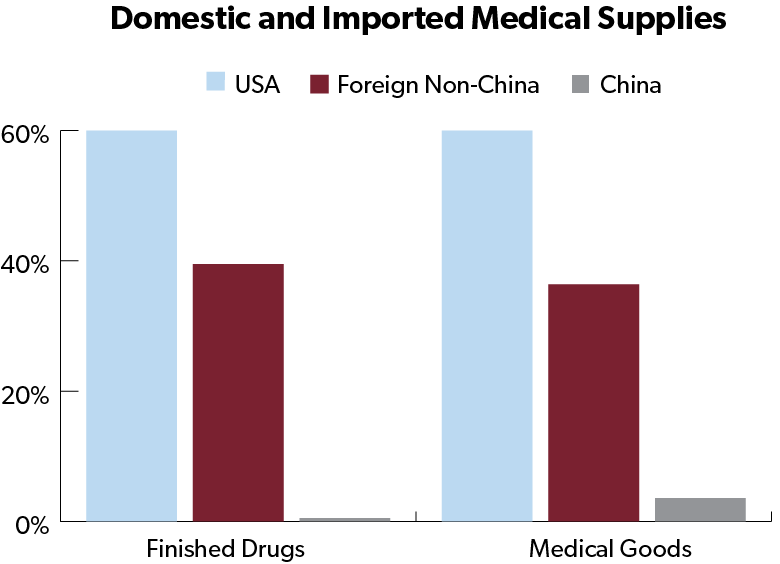 There may be legitimate areas of concern with respect to certain Advanced Pharmaceutical Ingredients (APIs) or specific medical devices imported from China, but in general most finished drugs and medical products are made in the United States, and most imports come from countries other than China. I estimate that about one-half of one percent of finished drugs and 3.6 percent of medical goods in the United States are imported from China. New “Buy America” restrictions could largely hit U.S. allies, not China.

Much like China’s state-owned enterprises are subject to the whims of that country’s communist leaders, the new order appears to be an attempt to strong-arm companies to produce in the United States based on the whims of the Office of Trade and Manufacturing Policy.

Responding to criticism of his proposal from drug manufacturers, Peter Navarro said: “this Big Pharma spin is simply a desperate attempt to stop President Donald J. Trump from moving the production of our essential medicines and medical equipment and supplies to the U.S.”

Navarro’s comment attacking U.S. businesses that produce our medical supplies is reminiscent of an earlier statement referring to Wall Street executives who dared to disagree with his China policy as “unregistered foreign agents.”

The truth about foreign suppliers

While it may be tempting for politicians to refer to U.S. “dependence” on foreign suppliers, the current COVID-19 crisis shows how foreign-based companies benefit Americans.

Korea’s Kogene Biotech is exporting COVID-19 test kits to more than 30 countries, and the only reason its kits are not available in the United States is that the Food and Drug Administration has not approved the test.

Although last year the United States cut hundreds of millions of dollars in aid to Central America over immigration disagreements, Hanesbrands factories in El Salvador, Honduras, and the Dominican Republic have contracted with the federal government to export 1.5 million surgical masks a week to the United States.

Germany’s Bayer AG is donating three million tablets of its malaria drug to the U.S. government for possible use against COVID-19.

Switzerland’s Novartis has pledged to donate up to 130 million doses of generic hydroxychloroquine to support the global COVID-19 pandemic response.

The U.S. Department of Health and Human Services has provided grants to the U.S. subsidiaries of Italy’s DiaSorin and Germany’s Qiagen to develop COVID-19 tests.

U.S. policy should encourage such mutually beneficial actions, not shut them down in pursuit of a misguided “U.S.-made, U.S.-owned” trade agenda.

The Coronavirus Aid, Relief, and Economic Security Act includes a provision directing the National Academies of Sciences, Engineering, and Medicine to prepare a report on America’s medical supply chain security. This is a wise response to legitimate questions that the government is not currently equipped to answer.

In testimony to Congress last year, the FDA stated:

“However, because of the limitations of available data, we cannot assess the extent of U.S. dependence on China.  For instance, we do not have information about the volume of API being produced in China or even in the United States, or how much of China’s API output reaches the U.S. market through other countries.

Similarly, we do not have information that would enable us to assess the resilience of the U.S. manufacturing base, should it be tested by China’s withdrawal from supplying the U.S. market. We do know that the U.S. drug supply is being compromised by drug shortages, in most cases triggered by manufacturing quality problems by U.S.-based as well as foreign producers.”

The proposed National Academies report would be a reasonable step forward in assessing the strength of U.S. medical supply chains. Without such analysis, the United States risks implementing a ‘shoot first and ask questions later’ approach that does more harm than good and that gives more authority to some of the same federal agencies that failed to respond promptly to COVID-19 risks.

Notes on data and methodology

According to a report from the Medicare Payment Advisory Commission, “Between 35 percent and 40 percent of domestic U.S. production [of medical devices] is ultimately exported, and a similar share of domestic U.S. consumption is imported.”

The Government Accountability Office reports that according to the FDA, about 40 percent of finished drugs and 80 percent of active drug ingredients are manufactured overseas.

Estimates on import volume are for 2019 based on Chapter 30 of the U.S. Harmonized Tariff Schedule, “Pharmaceutical Products,” and the following five subheadings of Chapter 90:

9020 Other breathing appliances and gas masks, excluding protective masks having neither mechanical parts nor replaceable filters; parts and accessories thereof.

9021 Orthopedic appliances, including crutches, surgical belts and trusses; splints and other fracture appliances; artificial parts of the body; hearing aids and other appliances which are worn or carried, or implanted in the body, to compensate for a defect or disability; parts and accessories thereof.

9022 Apparatus based on the use of X-rays or of alpha, beta or gamma radiations, whether or not for medical, surgical, dental or veterinary uses, including radiography or radiotherapy apparatus, X-ray tubes and other X-ray generators, high tension generators, control panels and desks, screens, examination or treatment tables, chairs and the like; parts and accessories thereof.