A recent projection from the Congressional Budget Office (CBO) reveals a worrisome budget outlook.[1] The federal budget deficit for fiscal year (FY) 2020 is projected to reach $3.7 trillion, bringing the total federal debt held by the public to be over $22 trillion, which is about the same as the expected GDP. Given the record level of debt, any sensible policymaker would be extra cautious about continuing further deficit spending. But unfortunately, this is not the case as Members of Congress are calling for costly new spending on programs that are unrelated to addressing the current COVID-19 crisis.[2] Despite the already massive deficit, some lawmakers are arguing that the federal government should take advantage of historically low interest rates and boost deficit spending even further. While low interest rates make debt finance costs less expensive, this simplistic rationale overlooks the fundamentals that point to a need for immediate fiscal consolidation.

House Democrats had been looking for an opportunity to stimulate the economy through a big spending package, and they found infrastructure as their vehicle. They initially introduced a $500 billion infrastructure bill and bloated it up to a $1.5 trillion package that includes all sorts of wasteful programs and inefficient regulations that are unrelated to tackling the COVID-19 crisis.[3] As for how Congress would pay for such a huge bill, House Speaker Nancy Pelosi (D-CA) remarked “with the interest rates where they are now, there’s never been a better time for us to go big.”[4]

President Trump agreed with the Speaker, writing on his Twitter feed, “With interest rates for the United States being at ZERO, this is the time to do our decades long awaited Infrastructure Bill,”[5]

Pelosi and Trump are correct about current interest rates, which have never been lower since the Federal Reserve was established in 1913. When the economy suffers a decline, the Federal Reserve takes action to reverse its trajectory, and its favorite tool for economic stimulus is lowering interest rates. By making it cheaper to borrow money, the Fed encourages people to invest more to boost economic growth. The Fed controls the interest rate by setting the federal funds rate, the interest commercial banks charge each other to lend Federal Reserve funds overnight. This rate serves as a benchmark for all other interest rates. A recent statement from the Fed announces that the Federal Open Market Committee would maintain the federal funds rate between 0 to 0.25 percent.[6] The last time the Fed implemented such a dramatic drop was in response to the Great Recession of 2008.

Interest rates this low do reduce the cost of financing deficit spending, but the price of borrowing should not be the only consideration. It is also important to consider how much the federal government owes, how much it is already paying in interest, and the potential for unforeseen fiscal threats on the horizon. According to CBO, the federal government had over $22 trillion in debt and spent $376 billion in paying off interest in FY 2019.[7] As a comparison, $376 billion is more than the entire GDP of Denmark in 2019. More deficit spending would mean more debt, and more debt would likely mean more interest payments in the future.

Advocates for deficit spending may point out that, even with the $3.7 trillion additional debt this year, financing costs may remain low because of the near-zero interest rates. This assumes that the rate will stay low for an extended period. However, the economic outlook is much more uncertain than they believe, and recent data from the Federal Reserve concerning the supply of money is one example of such uncertainties. The chart below shows the supply of money in the U.S. since June 2019:[8] 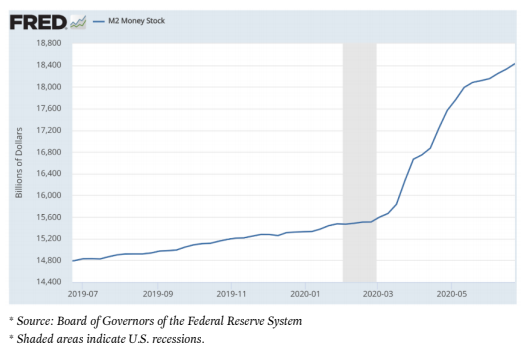 According to the Fed, M2, the measure of the money supply that includes cash, checking deposits, and easily convertible near money, has experienced an almost 20 percent increase since February. This has left economists at Morgan Stanley worried, because M2 has been predictive of inflation for much of the past 100 years.[9] The last time M2 growth was as high as now was during periods of high inflation in the 1940s, 60s and 70s.

The growth in the money supply alone of course does not prove that the Fed will lose control of inflation. After all, the Fed has successfully tamed inflation for the last 40 years. The doomsayers, including those who warned of imminent inflation due to so-called “quantitative easing” in response to the Great Recession of 2008, have proven to be overly pessimistic. Furthermore, a recent poll of 161 economists shows that most of them are actually more worried about disinflation as a result of weaker demand rather than inflation once the pandemic subsides.[10] Nevertheless, the economic outlook is highly volatile, and the money supply along with the expected strong 3rd quarter recovery could result in higher inflation. If this were to happen, then the Fed would have a difficult choice to make. Either continue its actions to keep interest rates historically low, thereby risking higher inflation, or raise interest rates to control inflation, thereby increasing deficit financing costs for the federal government.

Deficit spending advocates dismiss this concern, but it is important to remember that a tiny jump in interest rates can have a significant effect on deficit financing costs given the enormity of total debt. Given that the federal government will have $22 trillion in debt by the end of the fiscal year, a single point percentage of interest rates would mean around $220 billion in interest per year. That is still more than the annual GDP of many major countries. Moreover, before the crisis, CBO had developed a “rule of thumb” calculation that if interest rates were even 0.1 percentage point higher each year than they are in CBO’s economic forecast, the cumulative deficit for 2021 to 2030 would be $185 billion larger than CBO’s projections.[11]

There are many other uncertainties in the economic outlook that could affect the budget besides inflation and interest rates. Variables such as the unemployment rate and trade policies can all change the budget outlook for better or worse. Given these uncertainties, Congress should not assume that interest rates will stay low in order to fuel excessive spending. Instead, it should err on the side of caution and begin the challenging work of restraining spending.

Paying Off After the Crisis

Those who want more deficit spending may also invoke the common notion that it is the federal government’s job to spend during an economic downturn such as this and pay them off when it is over. They may be right in principle but Congress’s spending record tells a different story. Over the past decade, the U.S. has experienced the longest economic expansion in its history. This should have precipitated reductions in spending to reduce total debt if Congress has been adhering to countercyclical fiscal policies in practice. However, the chart from the Peter G. Peterson Foundation shows that the federal government increased, rather than decreased, the national debt by $9 trillion:[12] 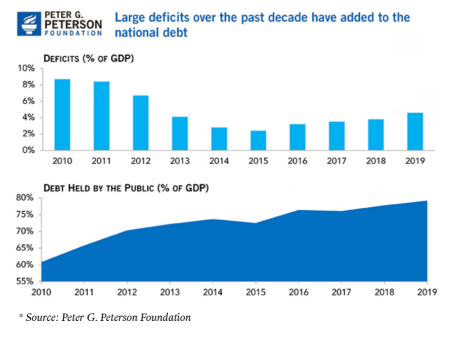 Policymakers should also consider the economic impact of maintaining a large debt-to-GDP ratio. The Mercatus Center conducted a review of literature on the relationship between government debt and economic growth, and they found that having a high national debt slows down economic growth.[15] Among the two dozen studies that span a decade of research, all except two support this claim. Moreover, in many countries, the negative impact of high debt becomes worse as the debt increases.

Mercatus estimates that even without taking into account the economic effects of the pandemic or the stimulus spending, the large and growing debt-to-GDP ratio in the U.S. would result in a loss of $4 trillion or $5 trillion in real GDP by 2049. Including the consequences of the pandemic into the equation means an additional 20 percentage points to the current debt-to-GDP ratio, which would harm the economy even more.

Before all the pandemic mayhem, CBO wrote in one of its reports that “high and rising federal debt would reduce national saving and income, boost the government’s interest payments, limit policymakers’ ability to respond to unforeseen events, and increase the likelihood of a fiscal crisis.”[16] The pandemic has shown that CBO was right. The economy crashed as the unemployment rate skyrocketed and GDP plunged. The federal budget outlook became worse as the deficit and debt hit a record high.

Our nearly insolvent entitlement programs also muddy any attempt at painting a rosy picture of the future budget. According to the 2018 Medicare Trustees report, the program’s trust fund is running out of money.[17] Starting in 2026, Medicare Part A will only be able to pay for 91 percent of costs, and that number will decrease to 78 percent by 2042. According to the 2020 report on the Federal Old-Age and Survivors Insurance and Federal Disability Insurance Trust Funds, Social Security will be insolvent in 2035 unless changes are made to how the system is funded.[18] These projections are not even taking into account the damages caused by the pandemic.

Meanwhile, with the recent surge in COVID-19 cases, America is still struggling to overcome the current crisis. One thing that Congress hopefully learned from the pandemic was that the federal government was not prepared for an unforeseen disaster such as this. The budget after the current crisis will render Congress even less prepared for any potential problem the nation will face in the future. To change that, Congress should work toward lowering the debt and stop using low interest to excuse deficit spending on unnecessary programs.

[5] @realDonaldTrump. “With interest rates for the United States being at ZERO, this is the time to do our decades long awaited Infrastructure Bill. It should be VERY BIG & BOLD, Two Trillion Dollars, and be focused solely on jobs and rebuilding the once great infrastructure of our Country! Phase 4.” Twitter, March 31, 2020. https://twitter.com/realDonaldTrump/status/1245000074167541761.