When the Biden campaign released details of the candidate's trade policy agenda, it missed a golden opportunity to provide a forward-looking alternative to President Trump’s costly and ineffective trade policies. Consider the current political and economic environment:

Instead of providing a constructive alternative to these views in order to appeal to the vast majority of the Americans who would benefit from fewer trade barriers, the Biden campaign seems to be trying to out-Trump Trump in an effort to appease a relative handful of anti-trade extremists.

For example, Biden proposes to perpetuate Trump’s efforts to disrupt private supply chains and impose costly “Buy American [or Else]” restrictions that would drive up the cost of doing business in the United States.

And while Biden says, “Trump’s go-it-alone trade war and empty ‘phase one’ deal with China has been an unmitigated disaster,” his plan fails to give a nickel of relief to American families that have been hammered by Trump’s regressive tariffs.

Biden’s plan to rebuild supply chains and his plan to ensure the future is “made in all of America” specifically endorse:

According to his campaign, “Biden starts with a pretty basic idea – when we spend taxpayer money, we should buy American products and support American jobs.” (emphasis in the original)

This idea is basic, but it is not good. As President Dwight Eisenhower explained, "certain laws require that, in Federal procurement, preference be given to domestic firms over foreign bidders...it is improper policy, unbusinesslike procedure and unfair to the taxpayer for the Government to pay a premium on its purchases."[8] Restricting federal purchases to American products only means paying more than the prevailing market price, which means American taxpayer dollars are not purchasing as many goods and services as they could otherwise.

In addition, when the U.S. decides to waste taxpayer dollars by inflating the cost of federal projects, foreign governments inevitably respond by excluding competitive U.S. suppliers from their procurement markets. Overall, no U.S. jobs are supported.

Biden’s plan parrots Trump adviser Peter Navarro’s assertion that the United States is “dangerously dependent on foreign suppliers” of medical supplies. As Curtis Ellis with the pro-tariff group America First Policies put it: "This is straight out of Peter Navarro's executive order.”[9]

In fact, there is no evidence that the United States is dangerously dependent on foreign suppliers. With respect to medical goods and pharmaceutical products, more than 60 percent of medical supplies are made in the USA. China accounts for just 2.1 percent of U.S. purchases.[10] 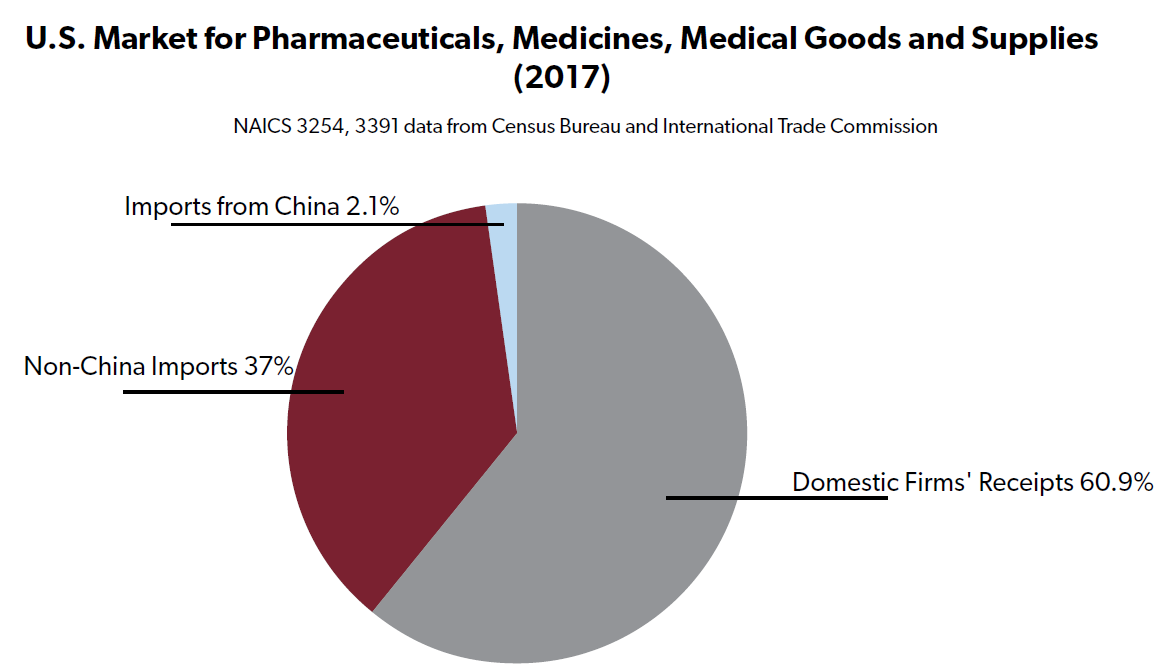 Overall, our three largest trading partners are the European Union, Canada, and Mexico. None of these pose a national security threat. And there is nothing inherently “dangerous” about importing pharmaceuticals from Switzerland or medical equipment from Mexico.

What would be dangerous is consolidating control of those supply chains in Washington, DC. As the Cato Institute’s Inu Manak and Logan Kolas point out: “Businesses know their supply chains better than government ever can, and allowing them the space to learn from the current pandemic and respond in kind is a better approach than trying to force sourcing decisions on them.”[11]

Attempting to source all production of medical goods in the United States instead of allowing companies to create diverse and redundant supply chains would leave Americans more vulnerable to future disruptions. After all, if the U.S. were to suffer a significant disease outbreak, natural disaster, or some other domestic event, Americans would suffer as our access to key goods and services would be disproportionately impacted. Biden’s plan to disrupt supply chains would also destabilize up to $83 billion of U.S. exports of medical supplies and pharmaceuticals, while increasing prices for U.S. doctors and patients.[12]

While Biden pays lip service to working with allies and opening foreign markets, as opposed to the angry assertion by President Trump that we are being “ripped off by everybody in the world,” he has offered few specific alternatives. When it comes to specifics, Biden offers policies that are mostly just protectionism with a happy face.[13]

The Biden campaign has plenty of time to give Americans an alternative to Trump on trade. Senator Joe Biden voted for the most successful and historic prosperity-enhancing trade agreements in world history, including the North American Free Trade Agreement (NAFTA) and the Uruguay Round agreement that created the World Trade Organization (WTO). When it was approved, the Uruguay Round agreement represented the largest global tax cut in history.[14]

Instead of echoing Trump’s dark rhetoric, The Biden campaign should harken back to John F. Kennedy’s optimistic and unapologetic embrace of trade: “Our efforts rest on the fundamental principle that both parties to a transaction benefit from it. Increased trade increases international income. It sharpens efficiency, and improves productivity, and binds nations together.”[19]

Traditionally, a Republican administration would have easily batted down policies like those proposed by Biden. It might have pointed out that it is ludicrous to discuss increasing the price tag of government projects instead of working to control federal budget deficits. And it might have explained that the world’s strongest and most prosperous countries are those that are the most open to international trade and investment.[20]

Unfortunately, the Trump campaign’s response to Biden’s trade plans was not just weak, it was nearly nonexistent. The administration’s reckless imposition of taxes on imports and its nonstop bashing of our biggest trading partners rendered it impotent to counter Biden’s economically destructive ideas.

At the end of the day, the number of Americans who will decide between Trump and Biden based on tariff policies as opposed to other issues is likely to be small. Even so, it is extremely disappointing that neither candidate appears to be willing to embrace the pro-trade policies of presidents ranging from JFK to Ronald Reagan that generated unprecedented prosperity in the United States and around the world.

[5] Solman, Paul. “Meet the Trump trade adviser whose tariff policy is about to be tested,” PBS NewsHour, March 8, 2018. Retrieved from: https://www.pbs.org/newshour/show/meet-the-trump-trade-adviser-whose-tariff-policy-is-about-to-be-tested.

[7] “The Biden Plan To Rebuild U.S. Supply Chains And Ensure the U.S. Does Not Face Future Shortages Of Critical Equipment,” Biden for President. https://joebiden.com/supplychains/ (Accessed July 24, 2020); and “The Biden Plan To ensure The Future Is ‘Made In All Of America’ By All Of America’s Workers.” Biden for President. Retrieved from: https://joebiden.com/madeinamerica/. (Accessed July 24, 2020).

[11] Kolas, Logan and Manak, Inu. “Supply Chains and Interdependence: Is this Really a Problem that Needs Solving?” Cato at Liberty, June 17, 2020. Retrieved from: https://www.cato.org/blog/supply-chains-interdependence-really-problem-needs-solving.