Biden administration officials have pledged to pursue a “worker-centric” or “worker-centered” trade policy.[1] The following four policies would allow President Biden to achieve that goal.

In 2019, 62.1 percent of imports were either intermediate goods like motor vehicle parts or capital goods like machinery that are used by U.S. workers to produce goods.[2] Eliminating taxes on these imports would support American manufacturing jobs, encourage companies to locate in the United States instead of abroad, and boost exports. 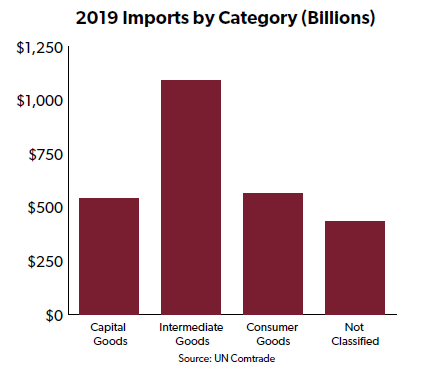 The Biden administration has pointed out that every consumer is also a worker: “The President knows that trade policy should respect the dignity of work and value Americans as workers and wage-earners, not only as consumers.”[4]

The inverse is also true: every worker is a consumer, and in 2019 American workers paid an average 14 percent tax on imported shoes and clothing.[5]

Shoe and clothing tariffs pit a small number of workers who benefit from tariffs against the vast majority of the American workforce. For every worker in the apparel and footwear manufacturing industry, 1,258 Americans working in other industries pay inflated prices for shoes and clothing as a result of double-digit import taxes.[6] 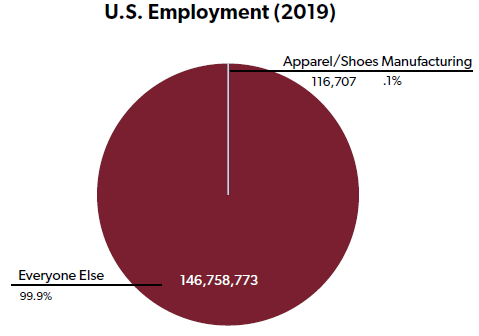 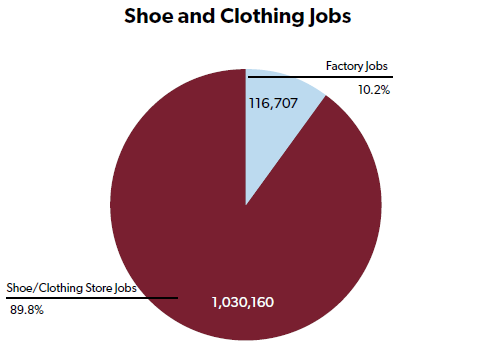 The federal government collected $15.8 billion from taxes on imported shoes and clothing in 2019, the equivalent of $135,776 for every production worker in the apparel and footwear industry. On average, apparel and footwear manufacturing workers earned less than $44,000.[8] Compared to the $15.8 billion cost of tariffs, it would cost taxpayers less to pay every person in the industry three times their current salary. 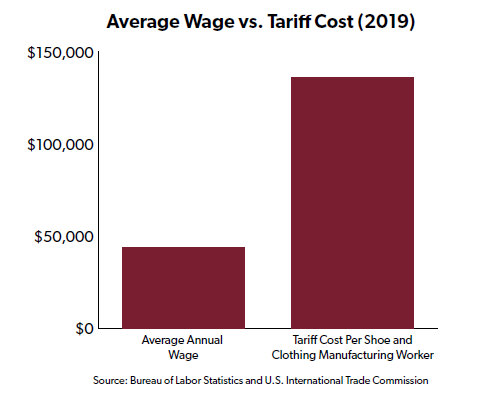 The shoe and footwear industry includes more than just manufacturing and retail workers. More than 28,000 American fashion designers earned an average of $73,790 in 2019 creating new clothing and footwear. Millions more work in the transportation and logistics industries that help deliver such items to consumers.[9] Eliminating tariffs on shoes and clothing would directly boost employment in these sectors. Nationwide, additional jobs would be created indirectly as the dollars American workers save as a result of lower-cost shoes and clothing were spent on other goods and services or invested in the U.S. economy.

The United States has been falling behind the rest of the world in negotiating trade agreements, and as a result U.S. exporters face higher tariffs than do most of their foreign competitors. As of 2016, U.S. exporters faced an average foreign tariff of 4.9 percent, ranking in the bottom ten of 136 countries ranked by the World Economic Forum.[10]

The United States has failed to implement a single new market-opening trade agreement since 2012. Since our last trade agreement took effect, other countries have signed 70 regional trade agreements, notably including the Comprehensive and Progressive Agreement for Trans-Pacific Partnership (CPTPP).[11] The Trump administration’s U.S.-Mexico-Canada Agreement (USMCA)  is not included, since the North American Free Trade Agreement (NAFTA) had already eliminated most tariffs between the three countries. 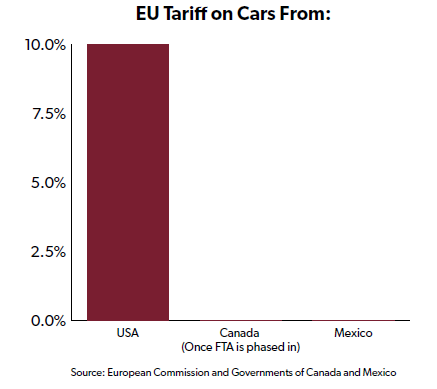 This gives Canada and Mexico a big advantage over the United States in attracting investment from carmakers that want to export to the EU. For example, when BMW announced a new factory in Mexico in 2014, the company said, “The large number of international free trade agreements – within the NAFTA area, with the European Union and the MERCOSUR member states, for example – was a decisive factor in the choice of location.” When Audi chose to locate a new factory in Mexico instead of Tennessee in 2012, the company’s chairman said, “Good infrastructure, competitive cost structures and existing free trade agreements played a significant role in the choice of Mexico.”[13]

If trade negotiators from Canada and Mexico have been able to negotiate tariff-free access to the EU (or close to it), what’s keeping U.S. negotiators from doing the same thing? Unfortunately, the Biden administration has suggested it will put trade negotiations on the back burner. According to Treasury Secretary Janet Yellen, “President Biden has been clear that he will not sign any new free trade agreements before the U.S. makes major investments in American workers and our infrastructure. Our economic recovery at home must be our top priority.”[14]

According to the Biden administration, “President Biden’s trade agenda will support all workers.”[15]

That is much better than pursuing a trade agenda that focuses on the 5.5 percent of the private-sector workforce who belong to labor unions without regard to the other 94.5 percent.[16] 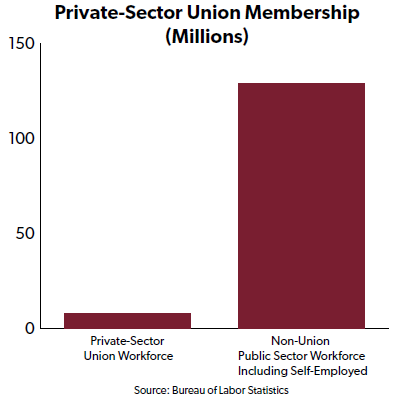 The goal of trade agreements should be to benefit workers by reducing barriers to international trade and investment, as opposed to imposing new multinational labor regulations or minimum wage provisions.

However, if labor provisions are to be included in future trade agreements, the Biden administration should consider guaranteeing every worker’s right to work without joining a labor union. Manufacturing workers in particular could benefit from this labor policy. In recent years, manufacturing employment in states with right-to-work laws has increased more than twice as much as in states that do not have such laws.[17] 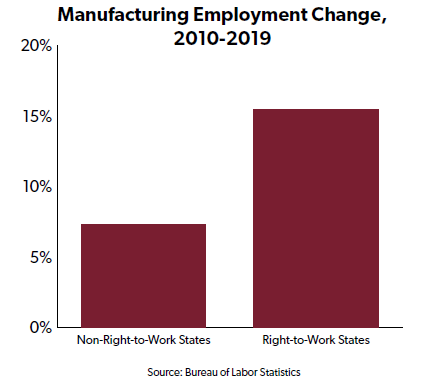 The White House has said that our trade and international economic policies must serve all Americans.[18] If the Biden administration is serious about that, a good start would be for it to listen to Americans, who believe trade is more of an opportunity than a threat by a 4.4-to-1 margin.[19]

Figure 8: What Foreign Trade Means to the United States 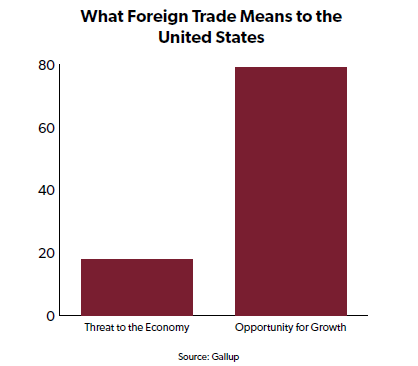 According to U.S. Trade Representative Katherine Tai, “i think that for a very long time our trade policies were based on an assumption that the more we traded with each other and the more liberalized our trade, the more peace and prosperity there would be.”[20] For the most part, that’s exactly what happened.

The problem facing American workers is too little trade liberalization, not too much. Workers continue to be harmed by U.S. taxes on imported inputs that they need to do their jobs, by import taxes that increase the cost of their shoes and clothing, and by the government’s failure to implement new market-opening trade agreements. A truly worker-centered trade policy should correct these shortcomings.

[12] Government of Canada. (2021.) “Opportunities and Benefits of CETA for Canada’s Automotive Exporters,” (Accessed March 21, 2021.) https://www.international.gc.ca/trade-commerce/trade-agreements-accords-commerciaux/agr-acc/ceta-aecg/business-entreprise/sectors-secteurs/auto.aspx?lang=eng; and the Government of Mexico (2021). “The Automobile Sector in Mexico,” (Accessed March 21, 2021). http://www.economia-snci.gob.mx/sic_php/pages/bruselas/pdfs/FS02AUT.pdf.