December 11, 2021 is the 20th anniversary of China joining the World Trade Organization (WTO). One of the most misunderstood events in recent U.S. economic history, China’s accession to the WTO is often wrongly blamed for causing various American economic maladies. Here are 5 facts about China and the WTO that every policymaker should know. 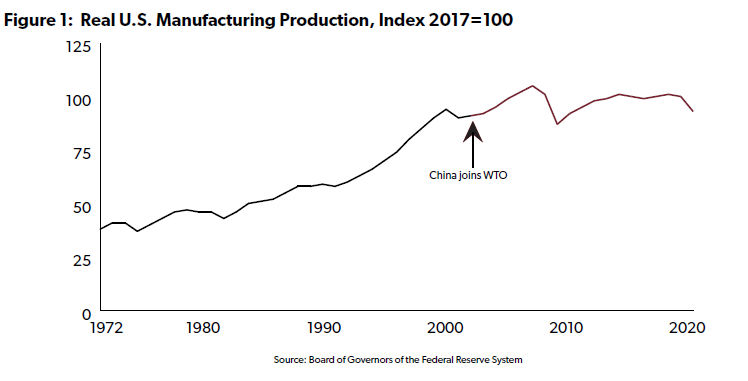 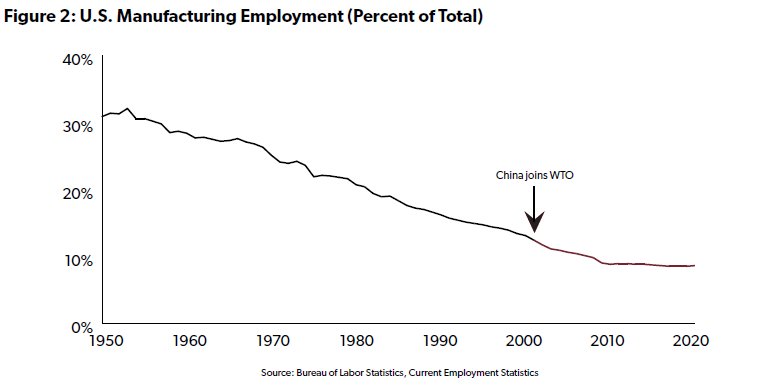 4. There has never been a single academic study showing net job losses due to China joining the WTO. If China’s accession to the WTO led to large-scale U.S. job losses, we would expect to see numerous economic studies of this phenomenon. Instead, there is zero evidence of net U.S. job losses. That doesn’t mean some industries didn’t suffer. But new jobs were created elsewhere, and the overall economic impact on Americans was positive.

For example, the most recent “China Shock” paper from David Autor, David Dorn, and Gordon H. Hanson concludes that, based on research calculating a reduction in consumer prices of 1.25 percent as a result of imports from China, just 6.3 percent of the U.S. population live in commuting zones that experienced declines in personal income per capita of 1.25 percent or more.[5] That would mean 93.7 percent of Americans live in commuting zones where the net welfare effect of trade with China was either neutral or positive.

5. Joining the WTO did not immediately transform China into a market-oriented democracy — but trade has proven more effective than trade barriers. As President Bill Clinton pointed out in 2000: “China is a one-party state that does not tolerate opposition. It does deny citizens fundamental rights of free speech and religious expression. It does defend its interests in the world, and sometimes in ways that are dramatically at odds from our own.”[6] At the time, reformers in China and the United States hoped WTO membership would encourage beneficial economic changes. According to Jin Liqun, China’s vice minister of finance: “WTO membership works like a wrecking ball, smashing whatever is left in the old edifice of the planned economy.”[7]

Unfortunately, the most optimistic hoped-for changes following China’s accession to the WTO largely failed to materialize. But there were some notable improvements. For example, China’s average tariff rate in 2001 was 14.1 percent. By 2019, its average tariff rate was just 2.5 percent, lower than the average U.S. tariff rate.[8] Moreover, a Cato Institute review of completed WTO disputes lodged against China concluded: “In all 22 completed cases, with one exception where a complaint was not pursued, China’s response was to take some action to move toward greater market access.”[9]

In comparison, the track record of tariffs as a tool to achieve change is much worse. Americans have paid more than $113 billion in taxes on goods imported from China as a result of tariffs imposed by President Trump and maintained by President Biden. According to the U.S.-China Economic and Security Review Commission, since those tariffs were imposed China has:

Unfortunately, many people who should know better continue to misstate the economic impact of trade with China. This rhetoric has spilled over into trade proposals that would be counterproductive to U.S. interests, including additional limits on trade with our closest allies.  An honest assessment of the impact of China’s accession to the WTO should be the starting point for an effective U.S. response.

[1] “Industrial Production: Manufacturing (NAICS) (IPMAN).” Board of Governors of the Federal Reserve Bank of the U.S. Retrieved from: https://fred.stlouisfed.org/series/IPMAN,

[3] Hicks, Michael J., and Srikant Devaraj. “The Myth and the Reality of Manufacturing in America,” June 2015 and April 2017. Conexus Indiana and Ball State University Center for Business and Economic Research. Retrieved from: https://conexus.cberdata.org/files/MfgReality.pdf.